Millions of Indians in states of Bihar, West Bengal and Uttar Pradesh have voted on the final day of the country’s staggered parliamentary elections, bringing an end to the mammoth polling.

People lined up on Monday to vote in the revered Hindu holy city of Varanasi, where Narendra Modi, the opposition Bharatiya Janata Party (BJP) candidate for prime minister, is seeking election.

According to the Election Commission, voter turnout was 79 percent in West Bengal, 55 percent in Uttar Pradesh, and 54 percent in Bihar till end of polling. Overall turnout for the elections came to 66.38 percent, beating the 1984 record of 64.01 percent and surpassing the 2009 record of 58 percent.

Modi is locked in a battle with Arvind Kejriwal, the leader of India’s anti-corruption Aam Aadmi Party, and Ajay Rai of the Congress party.

Earlier in the day, clashes were reported during the voting in West Bengal state, where Ajay Dasgupta, a Communist Party of India (Marxist) spokesman, accused governing Trinamool Congress workers of firing at his party supporters, wounding four of them.

The BJP went into the election with strong momentum on promises of economic growth. Early polls suggest there is deep dissatisfaction with the ruling Congress party’s 10 years in power.

Modi has been vying to win his seat in Varanasi located in northern Uttar Pradesh state six weeks after the start of the world’s biggest election.

Al Jazeera’s Sohail Rahman, reporting from New Delhi, said that the reason Varanasi is important is because it is a mulicultural city entrenched in Hinduism but with also a very large Muslim population.

If either Modi or Kejriwal “win Varanasi, then it sends a strong message that they can represent all of India,” he said.

Earlier, Modi urged voters to turn out in record numbers on Monday to throw the scandal-plagued Congress party, run by India’s most famous political dynasty, the Gandhis, from power.

“People are tired of false promises, corruption and the same old tape-recorded messages,” Modi said in a blog after campaigning officially ended on Saturday night.

Counting takes place on Friday and results are expected on the same day.

According to opinion polls and exit polls, the BJP is expected to win the most seats in the 543-member parliament, but it will likely fall short of an outright majority, meaning it will need to forge its own coalition with smaller and regional parties.

India’s opinion polls have proved wrong in the past and can be unreliable given the size and remoteness of sections of the country, which has 814 million eligible voters, the biggest electorate in history.

Rahul Gandhi, who has headed a lacklustre Congress party campaign, denied in comments published on Sunday that his party was staring at almost certain defeat.

“I am confident that the voters will give a mandate to an inclusive, fair and unifying (Congress) government,” he said in an interview to the Hindi-language Hindustan newspaper. 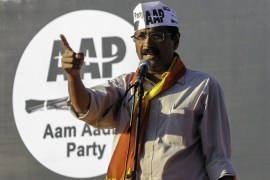 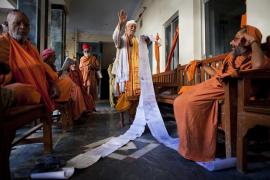 Ancient city will see BJP’s Narendra Modi and AAP’s Arvind Kejriwal face off on May 12 at end of India’s polling. 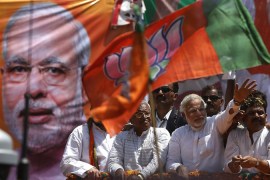