People had to be rescued from roof tops while others climbed into their attics to get away from fast-rising waters when nearly two feet of rain fell on the Florida Panhandle and Alabama coast in the span of about 24 hours, the latest bout of severe weather that began with tornadoes in the US Midwest.

In the Panhandle on Wednesday, roads were chewed up into pieces or wiped out entirely. A car and truck plummeted 25 feet when portions of a scenic highway collapsed.

Cars were overturned and neighbourhoods were inundated, making rescues difficult for hundreds of people who called for help when they were caught off guard by the single rainiest day ever recorded in Pensacola.

Boats and Humvees zigzagged through the flooded streets to help stranded residents. At the height of the storm, about 30,000 people were without power. One Florida woman died when she drove her car into high water, officials said.

In Alabama, Captain David Spies of Fish River/Marlow Fire and Rescue said he was part of a team who found two women and a young boy trapped in the attic of a modular home.

Spies said they received the first call of help before midnight Tuesday but they couldn’t find the group until about 8 am Wednesday.

By then, the water was two feet below the roof. A firefighter used an axe to punch a hole through the roof and free them.

There were at least 30 rescues in the Mobile area of Alabama, the AP news agency reported. Florida appeared to be the hardest hit. Governor Rick Scott said officials there received about 300 calls from stranded residents.

At the Pensacola airport, 39.5cm of rain fell on Tuesday before midnight – setting a record for the rainiest single day in the city.

Pensacola and nearby Mobile are two of the rainiest cities in the US, averaging more than five feet of rain in a year, according to the National Climatic Data Center.

The widespread flooding was the latest wallop from a violent storm system that began in Arkansas and Oklahoma and worked its way South, killing 37 people along the way, including a 67-year-old driver in Florida.

In Gulf Shores, Alabama, where nearly 53cm of rain fell over a day’s time, the scene resembled the aftermath of a hurricane.

By Wednesday afternoon, water had started to recede while the storm marched its way up the East Coast, bringing warnings of more tornadoes and flash flooding.

Over the past four days, the system created 65 tornadoes and slammed Arkansas’ northern Little Rock suburbs and the Mississippi cities of Louisville and Tupelo. Arkansas had 15 deaths; Mississippi had 12.

Authorities in Louisville searched for a missing eight-year-old boy after a large tornado killed his parents and destroyed their home. 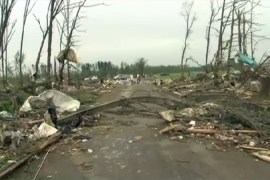 US tornado victims rebuild after destruction

Residents of southern and central US states brace for more bad weather as tornadoes sweep through several areas. 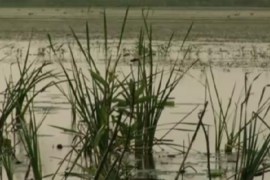 US wetlands decreasing due to climate change

New research suggests climate change and over-development cause the wetlands to disappear, putting wildlife at risk.