The US ambassador to Ukraine says an “inevitable, sharp reaction” should be expected from the United States if Russian troops were to cross the border into Ukraine.

Geoffrey Pyatt, speaking at a news conference in Kiev on Tuesday, said such a move would be “a major escalation”.

Russia has massed tens of thousands of troops in areas near the Ukrainian border, feeding concerns that Moscow aims to use unrest in the east as a pretext for an invasion.

Pyatt also said the Ukrainian government had been advised not to use force to clear local government buildings seized by pro-Russian protesters.

The separatists have seized city halls, police stations and other government buildings in at least 10 cities and towns across eastern Ukraine.

They are seeking – at the very least – a referendum on granting greater authority to Ukraine’s regions.

The seizures of buildings included the storming of a regional government headquarters by hundreds of pro-Russian separatists in Ukraine’s eastern city of Luhansk. The protesters were unopposed by police.

Kiev has all but lost control of its police forces in parts of eastern Ukraine, where the activists have seized buildings in the region’s second biggest city of Donetsk and several smaller towns.

“The regional leadership does not control its police force,”  Stanislav Rechynsky, an aide to Arsen Avakov, the interior minister, told Reuters news agency on Tuesday. “The local police did nothing.”

Rechynsky said the ministry had information that they would next try to take the local television centre.

Video footage showed men, some dressed in green camouflage fatigues and holding shields, walking around what appeared to be the foyer of the government headquarters as hundreds massed outside the building’s large wooden doors.

Pro-Russian separatists had previously occupied only the local security services’ building in Luhansk, which they took in early April.

Earlier on Tuesday, Russia’s foreign ministry said the European Union should be “ashamed” for “doing Washington’s bidding” by punishing Moscow with sanctions over the Ukraine crisis.

“Instead of forcing the Kiev clique to sit at the table with southeastern Ukraine to negotiate the future structure of the country, our partners are doing Washington’s bidding with new unfriendly gestures aimed at Russia,” the foreign ministry said.

“If this is how someone in Brussels hopes to stabilise the situation in Ukraine, it is obvious evidence of a complete lack of understanding of the internal political situation … and a direct invitation for the local neo-Nazis to continue to conduct lawlessness and reprisals against the peaceful population of the southeast,” it said in a statement. “Are they not ashamed?”

Grigory Karasin, the deputy foreign minister, said separately that the United States and EU sanctions were “an absolutely counterproductive, trite measure that would force the already critical situation in Ukraine into a dead end,” the state-run RIA news agency reported.

Russia has not yet announced any steps in response to the new sanctions. 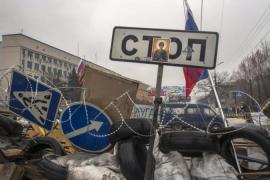 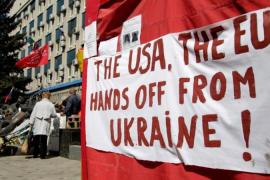 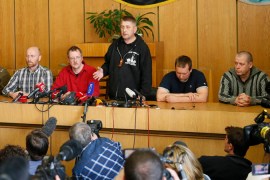 Hennady Kernes undergoing surgery and “doctors are fighting for his life” after being shot in the back, his office said.