A Paris court has given a Rwandan former soldier a 25-year jail sentence for genocide and crimes against humanity during Rwanda’s 1994 genocide.

It was the first trial in France to punish those responsible for the three-month wave of violence.

Pascal Simbikangwa, 54, described by prosecutors as a former army captain who rose to become the No 3 in Rwanda’s intelligence services, rejected the charges against him during the trial which culminated in Friday’s sentencing.

Up to 800,000 minority Tutsis and politically moderate Hutus died in the bloodletting.

Simbikangwa, arrested in 2008 on the French island of Mayotte in the Indian Ocean, was initially accused of complicity in genocide and complicity in war crimes in 1994, but not of personally killing anyone.

He has used a wheelchair since being injured in the mid-1980s, before the mass slaughter.

During the six-week trial, Simbikangwa said he was the victim of a “witch-hunt” orchestrated by the now ruling Tutsis.

Riot police encircled about 10 activists who shouted “France was complicit in Rwanda’s genocide!” as they tried to demonstrate outside the courthouse in Paris on Friday.

They did not have the proper permit, and were escorted away, officials said.

Simbikangwa appealed to the jury’s “conscience”, and asked for a prayer for Tutsis and Hutus who died – though he showed no personal remorse.

France has nothing on me, but I get charges that not even ministers or generals got.


“The real question is, ‘what do I have to gain by saying that I didn’t see any bodies?

Seated in a glassed-in defendant’s box, Simbikangwa flipped through handwritten notes as he invoked the memory of the “great men who built France” and cited philosophers Descartes and Montesquieu.

Simbikangwa proclaimed his innocence and insisted he never even saw any of the bodies that littered the country’s roads and towns at the time.

Simbikangwa sought during the trial to minimise his importance within the Rwanda secret services, calling himself a “mere agent” despite his loyalty to President Juvenal Habyarimana, a Hutu whose death in the downing of his plane in April 1994 prompted the slaughter.

But witnesses said he stored arms at his home, gave orders to extremist Hutus, and was known in the capital Kigali as a “torturer”.

“France has nothing on me, but I get charges that not even ministers or generals got,” Simbikangwa told the jury before it retired to consider the verdict.

In his final appeal to the jury on Friday morning, Simbikangwa insisted that the “authenticity of my innocence needs no more proof”.

Critics – many of them French citizens – say authorities from then-President Francois Mitterrand down thought that France’s strong support for the Hutu-led Rwandan government was wise.

Naively at best, those officials helped some perpetrators to flee Rwanda and others with ties to the genocide lived in France for years unpunished, the critics say.

Rwanda has long accused France of being reluctant to either extradite or prosecute Rwandans accused of having taken part in the genocide.

Rwanda’s justice minister hailed the sentencing of Simbikangwa as a “milestone” for justice.

“More particularly it is a redeemer of the French legal and judicial system which had become synonymous with shielding genocide suspects from justice,” Busingye told the AFP news agency.

“Whether this trial was symbolic will be tested in the weeks and months ahead by what happens to those files,” Busingye said.

French prosecutors are investigating about two dozen cases into Rwandans allegedly linked to the genocide, plus several others over alleged rape and complicity in genocide that have not yet identified a defendant.

Of the two dozen or so cases linked to the Rwandan genocide being investigated in France, one involves the widow of Habyarimana.

A former military police officer, Paul Barril, is also under investigation for allegedly having struck a deal to provide arms, munitions and training to Rwandan forces at the height of the genocide.

Under French law, Rwandans suspected of involvement in the genocide can be tried in a French court. 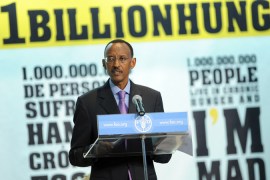 What is driving the African nation’s remarkable recovery – government planning or foreign aid and guilty consciences? 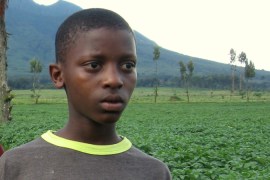 Can Shyaka get answers about his father’s identity from a mother traumatised by the Rwandan genocide? 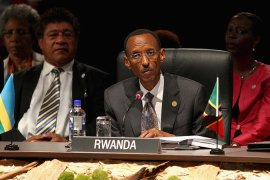 Rwanda: A democracy in the making?

As Rwandans are heading to the polls, we ask whether these elections will be transparent, free and fair.