Videos secretly recorded from inside Egyptian prison cells reveal that prisoners arrested during the crackdown that followed the July 3 military coup are being kept under harsh conditions.

The videos, smuggled out of prison and obtained by journalists, show prisoners kept in 1.5m by 2m cells, allegedly for 23 hours a day.

In one video, a prisoner describes his cell as an “underground dungeon,” with just a tiny ray of sunshine entering through a small barred window close to the ceiling.

Inmates have been forced to improvise various space-saving tricks to allow three people to sleep in places designed for solitary confinement.

Their belongings, including clothing, duffel bags, books and prayer rugs, are seen hanging on hooks attached to the wall, which often feature scrawled Arabic writings, including verses from the Quran.

Al Jazeera has confirmed the identity of the prisoners in the videos but, due to safety concerns, is withholding their names.

The footage provides insight into the lives of prisoners swept up by Egyptian authorities in the aftermath of the military coup that ousted President Mohamed Morsi last summer.

Between 17,000 and 22,000 people have allegedly been jailed, according to Wiki Thawra, an NGO that tallies victims and arrests in Egypt.

In one of the videos, a makeshift kitchen and bathroom are seen in the corner of the cell, separated only by a blanket hung up by the inmates to allow for privacy while using the toilet, which is no more than a hole in the ground.

One prisoner spoke of his struggle to squat when using the toilet, due to an injured kneecap, forcing him to relieve himself while standing.

Next to the hole in the ground is a small faucet, which is the only source of water in the cell. With the water allegedly cut off for up to 12 hours a day, inmates have resorted to storing water in Pepsi bottles.

Some cells contain an electric heater or hot plate that prisoners were able to secure by bribing their guards. In the kitchen area, inmate food, including eggs, bread, and cheese are exposed to insects, which enter through an open window.

The ground-level window also sweeps dirt and mud into the cell, particularly during rainy days.

The prisoners also said they have no source of heat to keep them warm, with temperatures particularly dropping during the winter evenings, and frigid air blowing in through the window.

One video shows a larger prison cell measuring 3m by 3.5m, holding 16 people for days at a time.

In such overcrowded cells, floor space is a luxury. The prisoners sleep side-by-side, and personal space is delineated by the size of a person’s body. “We sleep with our feet over each other, essentially,” one inmate said.

The prisoners showed resilience in the videos, sarcastically joking about their “modest library,” “grand bathroom,” and “very beautiful kitchen”.

But despite that, the long-term effects of being detained under severe conditions, particularly for those held in solitary confinement cells, has long been documented by special investigators and researchers.

Juan Mendez, UN Special Rapporteur of the Human Rights Council, likened the use of solitary confinement of prisoners to a form of “torture and cruel, inhuman and degrading treatment or punishment” in an interim report prepared for the UN General Assembly in 2011.

His report cites studies on the lasting effects that such confinement has on prisoners, noting that it “severely impairs their capacity to reintegrate into society when released from imprisonment”.

However, the overcrowded cell “does not relieve the isolation of solitary confinement, but tends to compound it,” according to Lisa Guenther, Associate Professor of Philosophy at Vanderbilt University and author of Solitary Confinement: Social Death and Its Afterlives.

“The situation we are in is as much a part of us as our mind and body,” Guenther told Al Jazeera. Thus, to impose such conditions on someone constitutes “a form of violence to the living being [of prisoners] as well as their structure of consciousness”.

Prisoners in Egypt are “isolated from the world,” and “over-exposed to a small group of others from whom there is no escape,” she said. 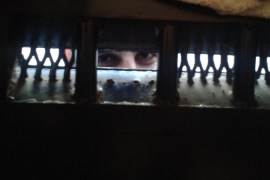