Russian aircraft carrying nearly 2,000 suspected troops have landed at a military airbase near the regional capital of the restive Crimean peninsula, a top Ukrainian official has said, accusing Moscow of an “armed invasion”.

“Thirteen Russian aircraft landed at the airport of Gvardeyskoye [near the city of Simferopol] with 150 people in each one,” Sergiy Kunitsyn, the Ukrainian president’s special representative in Crimea, told the local ATR television channel on Friday.

He also said that the airspace had been closed when the deployment happened.

Speaking on Friday, Barack Obama, the US president, said he was “deeply concerned” at the reports of the troop movements.

Obama said: “Any violation of Ukraine’s sovereignty would be deeply disturbing.”

Obama and European leaders would consider skipping a G8 summit in Sochi, Russia, planned for this summer if Russia intervenes militarily in Ukraine, a senior US official said on Friday.

The senior official, speaking on condition of anonymity, said the US is consulting with its European partners on potential costs that might be imposed on Russia for any Ukraine intervention.

US officials told the Reuters news agency that Washington has seen indications of troop movements from and into Crimea, but their numbers are unclear, as are the intentions of those movements.

The official said Washington’s response could also include withholding deeper trade and commerce ties that Moscow is seeking.

Turchinov said that Moscow was following a similar scenario to the one before it went to war with Georgia in 2008 over the breakaway Akhazia region which has a large ethnic Russian population.

He called on Vladimir Putin, the Russian president, to stop “provocations” in the semi-autonomous region of Crimea.

“Russia has sent forces into Crimea… they are working on scenarios which are fully analogous with Abkhazia, when having initiated a military conflict, they started to annex the territory,” he said in televised comments.

Two Crimean airports – the main international airport in Simferopol and a military airfield in the city of Sevastopol – have been taken over by what the Ukrainian Interior Minister Arsen Avakov claimed to be members of the Russian Federation Fleet, according to a statement he posted on his Facebook account.

The UN Security Council held a closed-door emergency session on the escalating crisis on Friday at the request of the new Kiev government, which warned that the situation in Crimea threatened Ukraine’s territorial integrity

Ukraine’s ambassador to the UN said he had told the Security Council that Russian military helicopters and transport planes are entering his country and Russian armed forces seized Crimea’s main airport.

Ambassador Yuriy Sergeyev told reporters Friday outside the Security Council that neither major airport in Crimea is under national control and that the main airport was “captured by Russian armed forces”.

He said 11 Russian attack helicopters had been brought in along with Mi-24 military transport planes.

The Russian Black Sea Fleet issued a statement denying the accusation and insisted its forces had not seized or taken any other action at a military airport near Sevastopol, the port on Ukraine’s Crimean Peninsula where the fleet is based, Russia’s Interfax news agency reported.

Earlier, deposed Ukrainian President Viktor Yanukovich has said called on the Crimeans not to let bloodshed happen in the region, where unidentified armed men have taken over two airports and some state buildings.

He repeated that he still saw himself as the Ukraine’s president and as such believed that Crimea must remain a part of Ukraine. 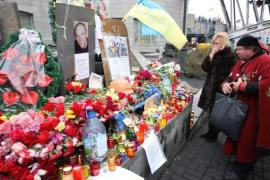 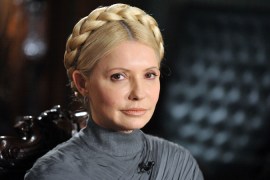 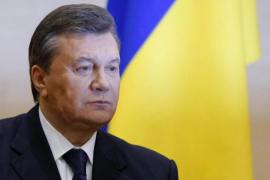