Oleksander Turchinov, Ukraine’s acting president, has said that his country is ready for talks with Russia to try to improve relations, but made clear that Kiev’s European integration would be a priority.

Turchinov said that Ukraine’s new leadership was ready to put Kiev-Moscow relations on a “new, equal and good-neighbourly footing that recognises and takes into account Ukraine’s European choice”.

“Another priority … is the return to the path of European integration,” he said, in an address to the nation on Sunday, one day after the removal of Viktor Yanukovich from the presidency.

Hours later, Russia recalled its ambassador in Ukraine to Moscow for consultations on the “deteriorating situation” in Kiev.

“Due to the deteriorating situation in Ukraine and the need for a comprehensive analysis of the situation, the decision was made to recall the Russian ambassador to Ukraine for consultations in Moscow,” the Russian foreign ministry said in a statement.

In a phone call on Sunday with his Russian counterpart Sergei Lavrov, US Secretary of State John Kerry “underscored the United States’ expectation that Ukraine’s sovereignty, territorial integrity and democratic freedom of choice will be respected by all states”.

These actions “offer the best and most promising path forward to restore peace and stability to Ukraine quickly, and to address Ukraine’s pressing financial challenges in the coming weeks and months,” Kerry said, according to
the official.

Earlier in the day, Ukraine’s parliament voted to temporarily hand over the duties of president to Turchinov, the speaker of the assembly, who told deputies to agree on the formation of a national unity government by Tuesday.

The development comes one day after parliament voted to oust Yanukovich from the presidency, setting May 25 as the date for new presidential elections, and two days after an agreement was reached with Yanukovich on the need to form a national unity government.

The whereabouts of Yanukovich remained unclear on Sunday, a day after he left the capital and rival Tymoshenko was freed from prison, returning to Kiev to address a massive, adoring crowd.

The centre of Kiev, meanwhile, was calm on Sunday.

Protesters on Saturday took control of the presidential administration building, and thousands of Ukrainians roamed the suddenly open grounds of the lavish compound outside Kiev, where Yanukovich was believed to live.

The political crisis in the nation of 46 million, strategically important for Europe, Russia and the US, has changed with blinding speed.

In the last week, first there were signs that tensions were easing, followed by deadly violence and then a deal signed under Western pressure that aimed to resolve the conflict that left the unity of the country in question.

The Health Ministry on Saturday said the death toll in earlier clashes between protesters and police had reached 82.

Ukraine is deeply divided between eastern regions that are largely pro-Russian and western areas that widely detest Yanukovich and long for closer ties with the European Union.

Yanukovich’s shelving of an agreement with the EU in November set off the wave of protests, but they quickly expanded their grievances to include corruption, human rights abuses and calls for Yanukovich’s resignation. 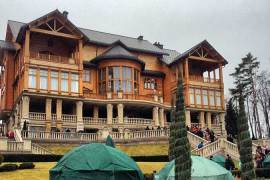 Behind the decadence of a Ukrainian president

With ousted President Viktor Yanukovich believed to be in hiding, protesters have flung open the gates to his estate. 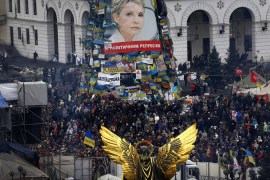