Thailand’s tense national election is under way with protesters forcing the closure of hundreds of polling stations in Bangkok, the outcome of which could push Thailand deeper into political turmoil and possible street protests for months.

The risk of bloodshed at the ballot on Sunday remains high, a day after seven people were wounded by shooting and explosions during a standoff between supporters and opponents of Yingluck Shinawatra, the prime minister, in a north Bangkok stronghold of her Puea Thai Party.

Al Jazeera’s Veronica Pedrosa, reporting from Bangkok on Sunday, said that election officials had warned of disruptions in voting in the Thai capital.

She said that at least 130,000 police have been deployed across the country to secure the voting, including 12,000 in Bangkok.

Al Jazeera’s Wayne Hay, also reporting from Bangkok, said voting had already been disrupted in Din Daeng suburb, a Yingluck stronghold, and that the polls could be cancelled.

Anti-government protesters reportedly blocked a government building, where ballot boxes are housed, and prevented the distribution of ballots, he said.

The main opposition Democrat Party is boycotting the poll and the commission has already voiced concerns that it would result in too few legitimately elected MPs to form a parliamentary quorum.

Speaking to Al Jazeera, Sunai Phasuk, a senior researcher on Thailand at Human Rights Watch, said fear remains that there could be confrontation between pro- and anti-election forces during the voting.

“We are urging all sides to reject violence,” he said.

Three soldiers and a district election official were killed in a bomb attack on Sunday – an attack which police say is unrelated to the elections and is part of the ongoing violence in the southern provinces.

The usual campaign billboards, glossy posters and pre-election buzz have been notably absent this time, as will be millions of voters fearful of poll violence or bent on rejecting a ballot bound to re-elect the political juggernaut controlled by Yingluck’s billionaire brother, Thaksin Shinawatra.

Thaksin, 64, is loved and loathed in Thailand, but his parties have won every poll since 2001. His opponents say he is a corrupt crony capitalist who rules by proxy from self-exile in Dubai.

The latest round of unrest in the eight-year political conflict erupted in November and underscored Thaksin’s central role in the intractable struggle, both as hero and villain.

Yingluck was largely tolerated by Thaksin’s opponents but her party miscalculated when it tried to introduce a blanket amnesty that would have nullified a corruption conviction against Thaksin and allowed him to return home.

With no quorum to re-elect a prime minister, it looks likely that Yingluck could be a caretaker premier for months.

Even with a fresh mandate, a stalemate is almost certain, giving her opponents more time to intensify their campaign against her and for legal challenges to be lodged.

Many Thais see history repeating after a cycle of elections, protests and military or judicial interventions that have polarised the country and angered Thaksin’s Red Shirt supporters, who held crippling blockades in 2010 and have pledged to defend his sister from any overthrow attempt.

Thailand’s military has remained neutral so far, but the judiciary has taken on an unusually large number of cases in the past two months in response to complaints against Yingluck and Puea Thai that could result in the party’s dissolution and lengthy bans for its top politicians.

There is also a chance the election could be annulled, as it was in 2006, over a technicality. The Election Commission is expecting petitions to be filed demanding the election be voided.

Ten people have died and at least 577 have been wounded in politically related violence since late November, according to the Erawan Medical Centre, which monitors Bangkok hospitals. 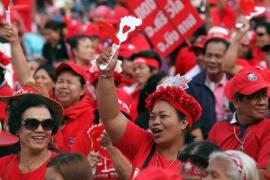 Supporters of the ruling party, known as the Red Shirts, want their hometown family to continue ruling in Bangkok. 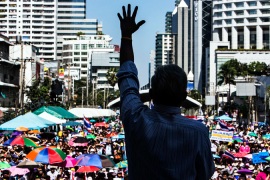 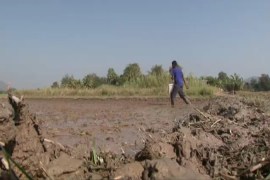