Security forces are working to restore order in cities across Brazil after violent clashes erupted during protests against the cost of the upcoming soccer World Cup.

More than 100 protesters remained in detention on Sunday in Sao Paulo, where thousands of people had taken to the streets a day earlier.

A number of protesters ran into a nearby hotel but were later brought out and loaded onto police buses.

Earlier, anarchist demonstrators known as Black Block attacked an empty police car and tried to overturn it, while others torched a small car and smashed the windows of banks, as they have in previous protests since last year.

Police responded with tear-gas and rubber bullets, dispersing the crowd.

The group described it as this year’s first act of protest against the football tournament.

Many in the football-mad country said they are not against the World Cup, but are outraged to see hundreds of millions of dollars spent on preparing 12 host cities for the sports event.

“We are seeing huge amount of money being spent on the World Cup, but health, education, public transport and housing – all those basic rights of Brazilians are being taken away and not guaranteed,” Al Jazeera’s Gabriel Elizondo quoted one protester in Sao Paulo as saying.

Brazil has been hit in recent weeks by fresh unrest of a different kind, with “rolezinhos” flash mobs composed primarily of young people from slum areas entering shopping malls in affluent districts of Rio de Janeiro and Sao Paulo.

Authorities have placed bans on the practice in a bid to stamp out the craze.

Meanwhile, Wellington Moreira Franco, the civil aviation authority’s chief, complained after an inspection of host cities’ airports that contractors were behind on many facility upgrades, particularly Fortaleza airport’s expansion. 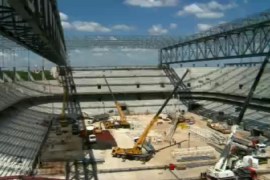 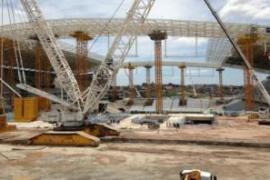