The UN has said it has evidence of the use of child soldiers and mass war crimes committed by both sides in South Sudan’s civil war.

Mass killings, extrajudicial killings, arbitrary detentions and sexual violence are some of the other violations seen in the country, Simonivic said.

“Quite a number of child soldiers have been recruited in the so-called White Army,” he said, referring to the Nuer tribe’s militia fighting in Jonglei state.

“We are thoroughly investigating these allegations.”

South Sudan’s conflict broke out in December of last year as a political dispute but quickly broke down along ethnic lines between followers of the president, an ethnic Dinka, and the former vice president, a Nuer.

Troops loyal to President Salva Kiir and rebels backing the deputy he sacked in July, Riek Machar, have been fighting since late last year.

The city of Bentiu, one of the cities that have traded hands between government and rebel forces,  “simply did not exist anymore,” the UN official said. “It was completely burnt down.”

Simonovic said he saw at least 15 dead bodies in Bentiu, in the oil-rich state of Unity, including one man’s arms bound behind his back.

He said an independent and impartial fact-finding commission should be established to investigate the crimes and make those responsible accountable.

On the ground, Kuol Manyang Juuk, South Sudan’s defence minister, said the leader of rebels battling government forces did not have enough control over his fighters to make any ceasefire holdl.

He said the two sides were still fighting over two strategic towns and said his government could ask Sudan for military help if the conflict threatened South Sudan’s oilfields.

Sudan, from which the south split in 2011, relies on revenues from fees charged for use of its pipeline that carries South Sudan’s oil exports to international markets.

Juuk said Machar had used a spiritual leader, who he named as Dak Kueth, to stir up people to fight.

“[Machar] is not in control of these people. So even if a peace agreement is signed, or cessation of hostilities, these people who are not under the control of Machar will continue creating insecurity for the people and government,” Juuk said.

The two sides are negotiating a ceasefire deal in the Ethiopian capital Addis Ababa, but there has been no clear progress. 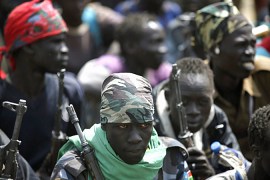 What is the outlook for the world’s newest nation? 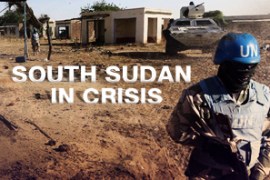 In-depth coverage of the unrest in the world’s newest country. 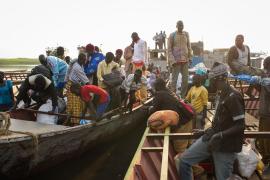 In Pictures: Displaced in South Sudan