The Pakistani Taliban has claimed responsibility for the killing of three employees of a local private television network in Karachi.

The claim was made after motorcycle-borne assailants shot a technician, guard and driver working for Express TV on Friday, according to the TV station.

A spokesman for the Tehreek-e-Taliban Pakistan (TTP), in a statement on Friday, accused Express TV and other media outlets of supporting the government in what it called a war against the group.

Sajjad Mohmand, in a phone call to Reuters news agency, said: “We will continue to target the media if they do not stop propaganda against Islam and the Taliban.”

Mohammad Akhtar, a senior police officer, said the Express TV workers were targeted by assailants while sitting in their vehicle on Friday.

“The van was parked near Board Office signal. The staffers were sitting inside van for their work. Four men came on two motorcycles; they extended their hands inside the window and opened fire,” he said.

“Shooters riding on motorcycles came and opened fire on them. They [the shooters] used a 32-bore gun with silencer in the attack.”

Ehsanullah Ehsan, a former TTP spokesman, told Express TV it had been attacked because the group considered its coverage biased and that it would continue to attack journalists they disagreed with.

“Channels should give coverage to our ideology. Otherwise we will continue attacking the media,” Express TV quoted him as saying.

The TV station was attacked twice last year, with the TTP claiming responsibility for one of the incidents.

In a separate incident in Karachi, also on Friday, unknown assailants killed the provincial chief of a Sunni party along with his driver and guard.

Mufti Usman Yar Khan, Sindh chief of Jamiat Ulema-e-Islam-Samiul Haq (JUI-S), was passing through Karachi’s Shara-e-Faisal road when the attackers fired and killed him, his guard and the driver.

Police said another person was injured in the attack.

“It was rush hour. It is difficult to identify in this night time. We will now collect the CCTV footage. Let us see how much it helps in the investigation,” Muqaddas Haider, superintendent of police, said.

The attackers apparently fled away from the crime scene. Police said they were investigating.

In recent years, Karachi has seen a sharp growth in violence, which many worry has given armed groups such as the TTP an opportunity to expand their presence.

Five journalists were killed last year in Pakistan, making it the fourth-deadliest country in the world for journalists, according to the Committee to Protect Journalists. 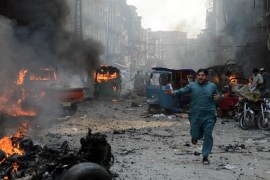 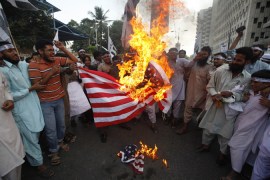 Security on high alert after Taliban vow revenge for killing of its leader Hakimullah Mehsud in US drone raid. 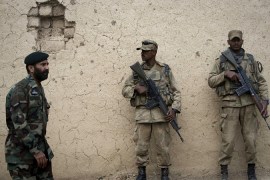 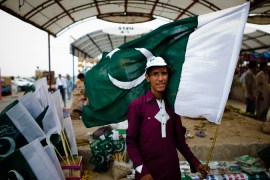