The bombs hit eight different areas on Monday. The deadliest blast tore through a small vegetable market and its car park in the Kadhimiyah area, killing seven people including two soldiers and wounding sixteen others, a police officer said.

That was followed by four parked car bombs, which went off in quick succession in the neighbourhoods of New Baghdad, Habibiya and Sabaa al-Bour – all striking outdoor markets or car parks.

Security forces were deployed to the affected areas, closing off streets and using sniffer dogs to search for more bombs.

No group has immediately claimed responsibility for the latest attacks. They come a day after a suicide bomber attacked mourners at a Shia mosque south of Baghdad, killing 47 people.

The United Nations mission in Iraq said about 800 Iraqis were killed in acts of violence in August.

Violence in Iraq has reached a level not seen since 2008, when the country was just emerging from its brutal sectarian conflict. 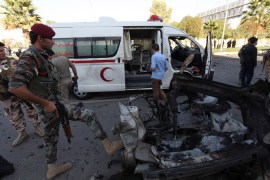 At least 26 killed in blast in Shia mosque south of Baghdad, just hours after suicide car bombing kills 11 in Erbil. 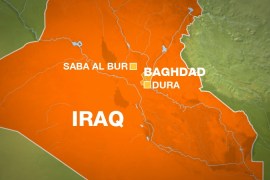 At least 23 killed in explosions at two outdoor markets in Iraqi capital.