The Japanese government will take prompt, comprehensive steps to clean up the wrecked Fukushima nuclear plant amid growing concerns about the plant operator’s ability to handle it, the country’s prime minister has said.

Shinzo Abe said on Monday that his government will step forward to take all necessary steps to handle the legacy of the March 2011 nuclear disaster.

He said the government will draw up a fundamental plan to do so “quickly.”

Tokyo Electric Power Co, or Tepco, said at the weekend that radiation near a tank holding highly contaminated water at the plant had jumped 18-fold, to a level that could kill an exposed person in four hours.

Abe’s cabinet is likely to discuss this week funding for the Fukushima clean-up after a series of revelations about leaks of radioactive water at the coastal plant, according to Tadamori Oshima, who heads the ruling Liberal Democratic Party’s taskforce on post-disaster reconstruction.

“This could be a plan to hire foreign experts, as Tepco intended, or a timeline for decommissioning the plant,” she said.

“That could take forty years, with some experts saying it could run to more than 100 years.

“They have reiterated that they might have no choice but to discharge some of the water into the ocean.”

If the water were to be discharged, it would be within the prescribed safe levels of radiation, our correspondent explained.

The public is concerned about turning the reactors back online and need reassurances.


Public concern over Fukushima, revived by the news of leaks of radiated water at the plant, have threatened to further delay the restart of other off-line reactors – a crucial part of Abe’s plan for economic revival and a pillar of the turnaround plan Tepco has given its creditor banks.

Paul Scalise, a research fellow at the University of Tokyo, said the continued closure of Japan’s nuclear reactors could lead to bankruptcy.

“Tepco and other utility companies have been bleeding financially now since nuclear reactors have been off line,” he told Al Jazeera from Tokyo.

“The utility companies are arguing for the nuclear reactors to come back online. What is holding things up is the perception, perhaps rightly, that the reactors are on unsafe territory and are positioned on an earthquake faultline.

“The public is concerned about turning the reactors back online and need reassurances.

“The economy is being impacted greatly through the import of these very expensive fossil fuels, and the reality is that without the nuclear reactors being brought back online, bankruptcy will most likely ensue.”\

Japan’s nuclear industry, which once provided a third of the nation’s power, has nearly come to a halt since an earthquake and tsunami struck the Fukushima plant more than two years ago, causing reactor meltdowns.

Tepco has been pumping water over the reactors to keep them cool, and storing the radioactive waste water as well as contaminated ground water in ever-growing numbers of above-ground tanks.

Following the discovery of high radiation levels in recent days.Shunichi Tanaka, chairman of the Nuclear Regulation Authority (NRA), has said there is no evidence of new water leaks.

However, he cautioned that the possibility that contaminated water may have leaked from the tanks “is a very serious issue”.

“We believe the monitoring of the tanks is a serious issue as well,” he said.

“The fact that radiation levels were not measured on a regular basis is an indication that management was not done in a stringent way.” 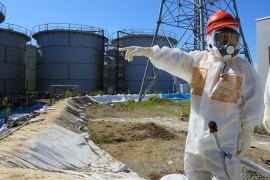 Radiation near a tank of contaminated water at the crippled nuclear plant increases 18-fold to deadly levels. 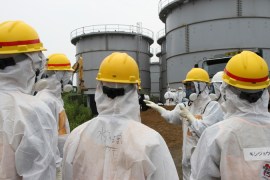 Fukushima: a disaster with a long half-life

No solutions and no end in sight to leaks and contamination, more than two years after Japanese nuclear disaster