Iranian President Hassan Rouhani has returned to Tehran to a mixed reception, with one protester throwing an egg at his vehicle while dozens of others chanted slogans in support of him, after having a historic conversation with Barack Obama, his US counterpart.

About 60 demonstrators chanted “Death to America” and “Death to Israel” as Rouhani’s motorcade drew out of Tehran’s Mehrabad Airport on Saturday, but they were outnumbered by 200 to 300 supporters of the president who shouted: “Thank you Rouhani”.

Before leaving New York where he attended the UN General Assembly, Rouhani had a 15-minute telephone conversation with President Obama on Friday, the first contact between leaders of the two countries since 1979.

Al Jazeera’s Soraya Lennie, reporting from the capital, Tehran, said, quoting witnesses, that there were some hardliners from members of paramilitary, Basij, who apparently hurled eggs at president and his car as he was leaving the airport.

“And there are reports that some arrests have been made, but investigations are indeed under way,” she said.

Obama, speaking from the White House, said after speaking with Rouhani that he believed the two countries could reach a comprehensive solution over Iran’s nuclear programme.

The president said he and Rouhani had both directed their teams to work quickly to pursue an agreement.

He said the US will co-ordinate closely with its allies, including Israel, which considers an Iranian nuclear weapon capability to be an existential threat.

Obama said the conversation showed the possibility of moving forward and that it was a unique opportunity to make progress with Iran over an issue that has isolated it from the West.

Iranian and UN officials have been meeting to continue talks on how to investigate suspicions that Iran has worked secretly on trying to develop nuclear weapons, claims which are denied by Tehran.

The impetus for the call came from Iranian officials, who US officials said told them hours earlier in New York that Rouhani wanted to speak to Obama before leaving the United Nations General Assembly.

The White House had indicated to Tehran earlier this week that it was open to an informal encounter between the leaders at the UN.

But the Iranians at the time said such a meeting was too complicated, raising questions as to whether Rouhani was wary of angering hardliners in Iran’s clerical hierarchy.

The leaders’ momentous conversation took place when Rouhani was on his way to the airport in his official limousine, the Iranian side said.

Obama spoke in English and Rouhani spoke Farsi as they chatted through interpreters, according to US officials.

But before hanging up, in an exchange that would have been thought impossible only days ago, Obama bade Rouhani “khodahafez” – Farsi for “goodbye.”

Rouhani replied “Have a good day, Mr President” in English, according to tweets by the Iranian leader’s office and a US official.

Mahjoob Zweiri, Professor of Contemporary History of the Middle East at Qatar University, told Al Jazeera: “There’s a changing of the mood in Iran, a mood towards – not reconciliation – but to the dialogue approach with the US.”

“President Rouhani started his PR (public relations) campaign before leaving for New York, where he sent different messages to Europeans and to the US that he is a president with lot of authorities, and he is capable to discuss all matters even the issue of enriching uranium which was a red line in previous years.” 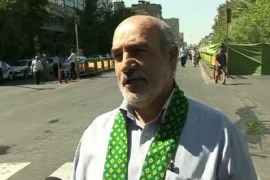 People in Tehran give their views on highest level talks since Iranian revolution in 1979. 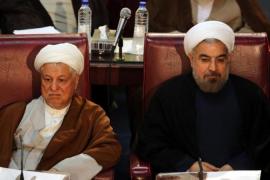 Is Iran loosening its grip?

We discuss whether the release of political prisoners shows promise or political maneuvering.