At least 170 people have been taken hostage in southern Philippines after fighters rampaged through coastal communities, leaving at least six people dead.

At least six people, including a naval soldier, were killed and about 220 civilians were taken hostage by the fighters, military officials said after the pre-dawn attack.

Zagala said the hostages, of which 170 are still being held, were being used as a “human shield”.

Abdul Sahrin, secretary-general of the MNLF, blamed the faction of fighter leader Nur Misuari for carrying out the attack.

Misuari is a former MNLF leader who previously entered into a peace agreement with the Philippine government.

Emmanuel Fontanilla, a spokesman for Misuari, blamed the military for the attack: “We did not attack. If there was no offensive, there would have been no clashes.”

Fontanilla said the group had planned protest action in Zamboanga City, similar to last week’s gathering in the city of Davao, which ended peacefully.

He said though that before they could launch the protest, the military attacked, forcing the MNLF to take “defensive action”.

Army officials said they have secured hospitals and schools but clashes were still ongoing. The Philippine aviation authority has shut down the city’s airport.

Regencia said a curfew had been declared in Zamboanga.

“Local media say the fighters have issued two demands.They want to be allowed to walk with their hostages towards the Zamboanga City Hall so they can hoist the MNLF flag,” Regencia said

“They are also demanding for government troops not to fire at them and let them keep their hostages [but] Zamboanga City Mayor Beng Climaco has rejected both demands.”

Claire Jose, a regional health officer in Zamboanga City, told Al Jazeera that the city looked like a “ghost town” because of a widespread shutdown.

The pre-dawn clash later spilled into Rio Hondo as people slept, prompting scores of residents to flee and with fighters taking up the hostages to thwart government forces, officials said.

Additional government troops have arrived at the Edwin Andrews Airbase, the headquarters of the Philippine air force in the city, the government said in a statement.

The MNLF signed a 1996 peace accord with the government, but many of its fighters held on to their arms and accused officials of reneging on a promise to develop an autonomous region for minority Muslims in the south of the predominantly Roman Catholic Philippines.

The group has said it was being left out in government’s negotiations with another fighter group, the Moro Islamic Liberation Front, which broke away from the MNLF in the early 1980s.

The 11,000-strong MNLF has engaged the Philippine government in Malaysian-brokered peace talks, which have progressed recently towards a new Muslim autonomy deal.

A decades-old insurgency by Muslim fighters in the south has killed about 150,000 people. 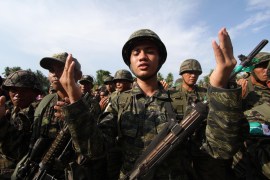 Agreement to share wealth could pave way for final peace deal to end conflict that has claimed 150,000 lives. 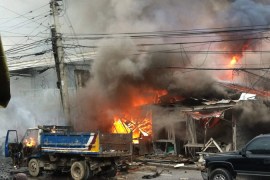