Sisi “met with several representatives of the Islamist movements … and stressed that there are opportunities for a peaceful solution to the crisis provided all sides reject violence,” army spokesman Colonel Ahmed Aly said in a statement on Sunday, without specifying who his interlocutors were.

Al Jazeera’s Hoda Abdel Hamid, reporting from Cairo, said the Muslim Brotherhood was not at the meeting, but other Islamist movements were.

“This is quite significant in the sense that those who met with Sisi can go back to the Muslim Brotherhood and relay the message, so it implies indirect communication.”

She went on to say that it is possible the Muslim Brotherhood “is looking for some concessions before joining political negotiations. They are trying to find gains before they sit and talk.”

“Everyone realises the importance of the Muslim Brotherhood being involved in the political process, otherwise there will be no process.”

Morsi supporters have been holding two major sit-ins for more than a month, paralysing parts of the capital, Cairo, and deepening divisions.

Authorities have repeatedly called for an end to sit-ins, and promised the protesters a safe exit if they went home.

The news of the military chief’s crisis meetings comes amid diplomatic push by the US and the EU.

The political arm of Morsi’s Muslim Brotherhood, which met US Deputy Secretary of State William Burns on Saturday, reiterated its continued commitment to “legitimacy, which stipulated the return of the president, the constitution and the Shura Council,” referring to the upper house of parliament.

The US envoy’s visit, which followed trips by EU foreign policy chief Catherine Ashton and German Foreign Minister Guido Westerwelle, was the latest move in a diplomatic drive to break the deadlock in Egypt.

He is expected to meet the interim interior minister and defense minister later on Sunday.

The latest declaration by the Brotherhood suggested that Burns’s visit had failed to shift their position.

“We affirm our welcome of any political solutions proposed on the basis of constitutional legitimacy and rejection of the coup,” said the statement from the Freedom and Justice Party.

Their sit in protests in Cairo against army rule continued, with demonstrators at one point blocking roads around the Rabaa Mosque, in Nasr City,  when police officers attempted to enter the area.

The Brotherhood told Al Jazeera that police were attempting to arrest a leader of the organisation when they were thwarted by protesters.

Recognising for the first time the strength of popular protest against his one-year rule, Morsi’s allies said on Saturday they respected the demands of millions who took to the streets before his overthrow.

Also on Saturday, the interim foreign minister, Nabil Fahmy, offered an “open invitation” for all groups to take part in a road map for reconciliation but first called for an end to violence.

His comments came as Egyptian police called on supporters of Morsi to abandon their sit-ins, saying it would pave the way for his Muslim Brotherhood to return to a normal role in the country’s political process.

Meanwhile, backers of Morsi on Saturday carried on with their weeks-long rallies in two encampments in Cairo.

Tarek El-Malt, a spokesman for the pro-Morsi bloc, said on Saturday his group wanted a solution that would “respect all popular desires”, while rejecting any role for the army chief Abdul Fattah al-Sisi, who led the overthrow of Morsi, in any political deal.

El-Malt said that these messages had been given at talks on Saturday in Cairo with the US Deputy Secretary of State, William Burns, and the European Union envoy Bernadino Leon.

Sisi, meanwhile, has urged the US to use its leverage over the Muslim Brotherhood to end the political crisis.

He also told the Washington Post newspaper on Saturday that he did not “aspire for authority”.

He also accused the US administration of failing to properly support Egypt.

“You left the Egyptians. You turned your back on the Egyptians, and they won’t forget that,” Sisi was quoted as saying. “Now you want to continue turning your backs on Egyptians?”

The US has walked a delicate line on Egypt, opting against labeling Morsi’s removal a “coup”. 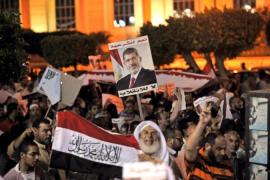 Police fire tear gas as pro-Morsi rallies to try and disperse crowds as US undersecretary of state flies in. 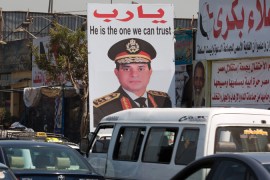 Egypt must establish a liberal democracy. 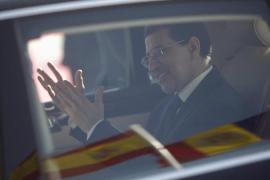 Events in Egypt and Morocco may set a dangerous precedent for Islamist leaders and their opponents.