Syrian activists claim that government forces have carried out a “poisonous gas” attack in suburbs of the capital, Damascus, leaving hundreds of people dead.

The Britain-based Syrian Observatory for Human Rights said the shelling was intense and hit the eastern suburbs of Zamalka, Arbeen and Ein Tarma.

It said at least 100 were killed, while the Local Coordination Committees said hundreds of people were killed or injured in the shelling.

Syrian authorities dismissed reports of a chemical attack on Wednesday as “baseless”, and said the reports were intended to hinder the mission of UN inspectors.

The main opposition group, the Syrian National Coalition, accused the regime of killing more than 650 people on Wednesday.

Al Jazeera’s Nisreen El-Shamayleh, reporting from neighbouring Jordan, said there were videos allegedly showing both children and adults in field hospitals, some of them suffocating, coughing and sweating.

“We have been receiving reports that the doctors in the field hospitals do not have the right medication to treat these cases and that they were treating people with vinegar and water,” she said.

The head of the UN chemical weapons inspectors in Syria said that reports of the gas attack should be investigated.

Swedish scientist Ake Sellstrom told news agency TT that while he had only seen TV footage, from which nothing could be determined, the high number of casualties reported sounded “suspicious”.

The Syrian National Coalition has called for an urgent UN Security Council meeting after the deadly attack.

“I call on the Security Council to convene urgently,” National Coalition leader Ahmed al-Jarba told Al-Arabiya news channel, condemning the Syrian army’s bombardment of the suburbs of Damascus as a “massacre.”

He urged the UN team now in Syria to visit the site.

UK said it would raise the reported chemical weapons attack at the UN Security Council and called on Damascus to give UN inspectors access to the site.

“I am deeply concerned by reports that hundreds of people,including children, have been killed in airstrikes and a chemical weapons attack on rebel-held areas near Damascus,” British Foreign Secretary William Hague said in a statement. 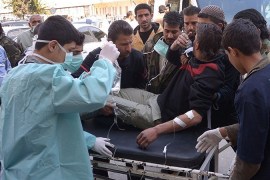 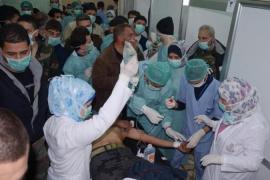 Foreign ministry in Moscow says opposition is responsible for attack that reportedly killed 31 people and injured 100. 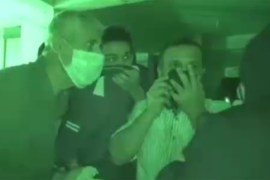