Zimbabwe’s constitutional court has ruled that a disputed elections which handed Robert Mugabe five more years in power were free and fair, dismissing allegations of vote-rigging.

“The Zimbabwe presidential election held on 31st July, 2013 was in accordance with the laws of Zimbabwe,” Chief Justice Godfrey Chidyausiku said on Tuesday.

“The said election was free, fair and credible.”

Meanwhile, the US State Department said it believed Zimbabwe’s election was flawed and it did not plan to loosen sanctions against Mugabe’s government until there are signs of change in the country.

The US imposed sanctions on Mugabe in 2003. The sanctions, which ban more than 250 Zimbabwean individuals and companies from doing business with the US, were extended in 2009.

Mugabe, who has ruled Zimbabwe since independence from Britain in 1980, is set to be sworn in as president as early as this week, extending his 33-year rule of the country after winning the July 31 election.

The 15-nation Southern African Development Community, which helped broker a power-sharing deal after disputed elections in Zimbabwe in 2008, backed Mugabe’s re-election on Sunday.

The opposition Movement for Democratic Change, led by Morgan Tsvangirai, dropped its court challenge on Friday to Mugabe’s landslide win, saying it doubted it would get a fair hearing.

The Zimbabwe Election Support Network said registration flaws may have disenfranchised up to a million people out of 6.4 million registered voters. 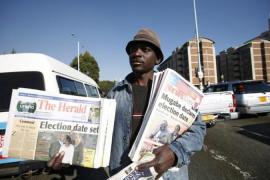 As presidential elections were held, an intense political battle played out across the country’s airwaves. 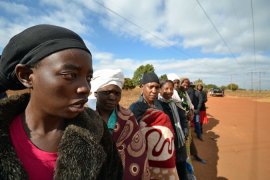 With Robert Mugabe seemingly defying the odds to win yet another term in power, opposition figures cry foul. 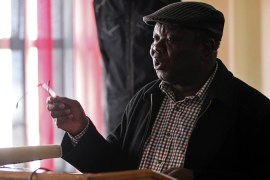