Tunisia’s powerful union federation has given the governing Ennahda party of one week to reach a deal for creating a new technocrat government.

The 600,000-strong Tunisian General Labour Union (UGTT) issued the ultimatum on Friday and said that it would be “forced to consider” other options of the government failed to act.

The union has has been trying to mediate between the moderate Islamist-led government and the secular opposition, which has demanded Ennahda’s exit and the dissolution of a transitional Constituent
Assembly that is weeks away from completing the country’s new draft constitution.

The Ennahda party is facing mounting pressure even from its coalition partners and opposition figures have not relinquished their calls to dissolve the Assembly, and there have been calls for Ali Larayedh, the prime minister, to resign.

Bou Ali Mbarki, deputy leader of the UGTT, said that the union would continue to hold talks on the issue.

“If our demands of changing the government and implementing a time frame for the Constituent Assembly, then we will have other options that we will be forced to consider,” Mbarki told local Nesma TV, without giving further details.

Ennahda’s junior coalition partner, the secular Ettakatol party, has threatened to withdraw if a unity government is not formed.

Tensions have risen in Tunisia since the murder last week of a leftist politician, the second political assassination in six months.

The tense political climate, along with clashes between the army and armed groups near the Algerian border, risk disrupting the democratic transition that began after Tunisians toppled an autocratic president in 2011.

The UGTT, which is seen as being closer to the opposition, has offered a compromise that would put a new technocrat government in place but preserve the Assembly.

The transitional body would be put on a sped-up time scale for completing the constitution and the country’s new election laws.

The UGTT is one of the most powerful political and economic forces in Tunisia.

A single day of strikes last week cost the country millions of dollars and plunged its currency to a historical low against the dollar.

Despite efforts to reach a deal, both sides escalated the stand-off on Thursday and called for rival “million-man” marches over the weekend.

The government has refused to remove the prime minister under any new deal, but has indicated it is willing to consider creating a new unity government to help ease the political crisis.

Rachid Ghannouchi, Ennahda party chief, said that the party was holding firm to keep Larayedh as head of the government.

“We are open to new deals,” he told the local Mosaique radio station on Thursday.

“But the Constituent Assembly is a red line, and we call on all members to return back to their work and complete the constitution.” 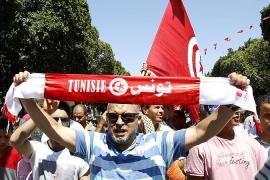 Leading Ennahda party may have to make uncomfortable concessions and unite with a fractured opposition block. 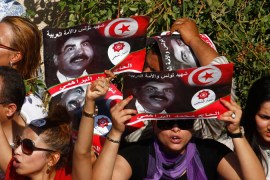 Tunisia in political chaos after death of MP