Silvio Berlusconi has lashed out after losing an appeal against a tax fraud conviction, telling Italy that he is an innocent victim of accusations and unjustice.

Italy’s top court confirmed on Thursday that the former Italian prime minister was guilty of tax fraud relating to deals made by his media company. He was sentenced to four years in prison, but three tears are covered by an amnesty, and Berlusconi is almost certain to be granted community service or house arrest.

Later in the evening an embittered and visibly shaken Berlusconi said in a video message, broadcast on Italian media, that the sentence was baseless and he would continue his political career.

“For the commitment I have shown these past 20 years for my country and as I reach the end of my active life, I have been rewarded with accusations and a sentence based on nothing at all,” Berlusconi said.

“This is a country that does now know how to be just,” he said, speaking from his luxury residence in central Rome, adding that the sentence “takes away my personal freedom and political rights”.

Supporters and opponents of the media baron staged small demonstrations in different parts of Rome after the court confirmed the sentence.

“Hands off Berlusconi” read a placard held up by one of around 60 activists near the ageing playboy’s luxurious home in the centre of the Italian capital.

“We want to say that whatever happens, we will be with him,” said Simone Furlan, leader of a group calling itself “Silvio’s Army” which organised the rally.

Outside the courtroom in a different part of the city centre, a group of anti-Berlusconi activists gathered – holding up a banner reading: “The law is equal for everyone”.

Court sources had quoted by the Italian news agency ANSA said there was a possibility that if there was no ruling by 1900 GMT, the verdict could be delayed until Friday.

Even if Berlusconi’s conviction is upheld, the sentence cannot be implemented until the Senate votes to lift his parliamentary immunity – a process that could take weeks or even months.

The case revolves around Berlusconi’s business empire Mediaset – the starting point for his first foray into politics in the early 1990s.

The current trial is Berlusconi’s second and final appeal in the case, which first went to trial in 2006.

The verdict is the first definitive conviction since all past rulings against him have either been overturned on appeal or the charges have expired due to Italy’s slow justice system.

He is also appealing against convictions in other cases for having sex with an underage prostitute, abusing his prime ministerial powers and leaking a police wiretap to damage a political rival.

Prosecutors have also filed charges alleging he bribed a senator to join his ranks in a move that helped bring down the government in 2008. 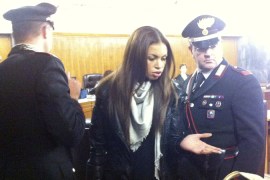 Exotic dancer who Italy’s former prime minister allegedly paid for sex appears in court but is not called to testify.