There are unconfirmed reports that the mosque in Cairo where hundreds of anti-coup protesters were holed up have been cleared by Egyptian security forces.

Security forces had earlier opened fire at the Fateh Mosque near Ramses Square on Saturday.

Some news agencies reported that the gunfire erupted as police tried to force their way into the mosque. Hundreds of people inside have been refusing to leave for fear of being attacked by crowds of “thugs” mingling with security forces outside.

The AFP news agency said police and military forces fired heavy bursts at the building after they were shot at from inside the mosque and from its minarets, a claim denied by protesters inside the mosque.

They pointed out that there was no access to the top of the minarets from inside the mosque and that an insider could not have taken up positions there to fire at security forces outside.

AFP reported that police managed to drag several men out of the building in the confusion. Those men were then confronted with angry neighbourhood residents who attacked them with sticks and iron bars.

One man, Waleed Attar, was among a group who managed to escape the building as gunfire erupted. He told Al Jazeera: “We didn’t know where the bullets were coming from.”

He said they managed to flee and avoid “thugs” waiting outside. “We found our way between vehicles before the thugs could trap us, we ran for fear of being shot. Many of those trapped were being assaulted by thugs. They said we would all be slaughtered.”

Earlier, speaking to Al Jazeera by phone from inside, protester Omaima Halawa said there was shooting inside and outside the building. Cracks of automatic gunfire and screaming could be heard in the background as she spoke. Halawa said there were about 700 people inside, including women and children.

A witness to the shooting, Abdel Kouddos, told Al Jazeera: “There were scenes of heavy gunfire. Police and security forces began firing at the minarets. Shortly after that there was fire from inside the mosque. It was unclear who was doing the shooting.”

Anti-coup protesters found refuge in the mosque late on Friday after a “day of rage” protests called by opponents of the country’s military-led leadership turned to bloodshed.

Reports said at least 95 people were killed in Ramses Square when security forces fired on marchers – the worst violence witnessed on Friday. The Fateh mosque was turned into both a morgue and a field hospital for those injured.

At least 173 people were killed and 1,330 others were injured nationwide on Friday, according to a government spokesman.

Friday’s marches were organised in response to police action on Wednesday to remove protesters from sit-ins calling for the return of the deposed president, Mohamed Morsi, and the end of military rule.

An estimated 600 people were killed in the operation.

Mostafa Hegazy, a political adviser for the interim presidency, said in a statement on Saturday that authorities were “facing a war launched by extremist forces” which was  “escalating every day to a terrorist war”.

He said that all indicators showed that what was happening “was not political disagreement, but a wave of violence and terrorism”. 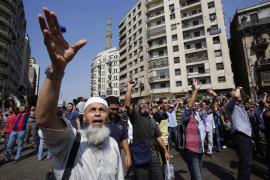 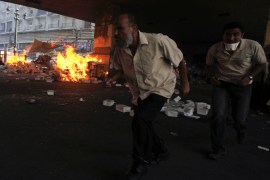 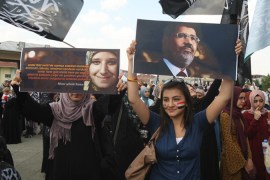