The US has cancelled a biennial military exercise with Egypt after the Egyptian government’s deadly crackdown on protesters in Cairo this week.

In a statement on Thursday, US President Barack Obama said Washington “strongly condemned” the crackdown on supporters of deposed president Mohamed Morsi.

Egyptian security forces violently ended their six-week-old sit-ins on Wednesday, and more than 500 people were killed in the clearing and subsequent clashes across the country.

“We sustain our commitment to Egypt and its people… but our traditional cooperation cannot continue as usual,” Obama said, announcing the cancellation of the Bright Star exercises, which typically involve several other European and Arab allies.

Al Jazeera’s Patty Culhane, reporting from Washington, DC, noted that Obama did not mention any changes to the $1.3bn annual US military aid package to Egypt.

“He is cancelling that military exercise which was to begin in about three weeks, but at the same time he is not cancelling the $1.3bn of aid – money that in the past has gone to buy tanks and armoured vehicles and helicopters that you now see in Egypt’s streets and air,” she said.

“What we are starting to see now are some very influential opinion pages in newspapers such as The New York Times and The Washington Post, they’ve come and said that if the president doesn’t cut off aid, he will be complicit in the ‘horrendous violence’ in Egypt.”

“The United States strongly condemns the steps that have been taken by Egypt’s interim government and security forces,” Obama said from his vacation home on the Massachusetts island of Martha’s Vineyard.

“We deplore violence against civilians. We support universal rights essential to human dignity, including the right to peaceful protest.”

Other world leaders, including the EU and the UN, have also condemned the violence, and called on security forces to show restraint.

The US, along with the EU, had tried to negotiate a peaceful resolution to Egypt’s worsening political crisis.

William Burns, the deputy secretary of state, travelled to Cairo earlier this month and met both the army-backed interim government and senior officials from the Muslim Brotherhood.

Bernardino Leon, the EU envoy, told Reuters on Thursday that “we had a political plan that was on the table that had been accepted by [the Muslim Brotherhood].”

He did not share details of the plan, and whatever it was, the army did not accept it: The interim government announced last week that foreign-led mediation had failed. 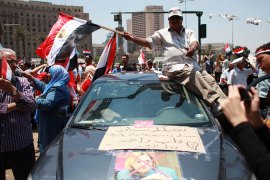 Did US funds help oust Morsi?

We discuss claims that Washington has quietly bankrolled Egyptian groups that pressed for the president’s removal.