Egypt’s Muslim Brotherhood has asked supporters of Mohamed Morsi, the deposed president, to take part in a nationwide Day of Rage in protest against the recent violent clearing of protest sites by security forces.

The announcement came a day after hundreds of people were killed in the police action that ended two sit-ins in Cairo that began after the army toppled Morsi on July 3.

“Anti-coup rallies tomorrow will depart from all mosques of Cairo and head towards Ramsis square after Jumaa prayer in ‘Friday of Anger’,” Gehad el-Haddad, Muslim Brotherhood spokesman, said on Twitter.

In a separate statement on Friday, the Muslim Brotherhood said: “Despite the pain and sorrow over the loss of our martyrs, the latest coup makers’ crime has increased our determination to end them.”

Egyptian state TV is reporting that the military has deployed troops to guard what it describes as vital installations. Egypt’s army commanders are warning troops will fire at anyone who attacks government buildings.

The Health Ministry said that at least 578 people and 46 police officers were killed in the clearing and subsequent clashes nationwide on Wednesday, and more than 3,500 injured.

The group accuses the military of staging a coup when it toppled Morsi. Liberal and youth activists who backed the military see the move as a positive response to public demands.

Egypt spent its first day under emergency rule and curfew on Thursday, with Cairo remaining tense and bracing for further unrest.

Although the night-time curfew ended at 6am local time on Thursday morning, few dared to venture out.

Police were out and busy removing the debris from the camps at Rabaa Square and Nahda Squares, where thousands of pro-Morsi supporters were driven out and hundreds killed in Wednesday’s crackdown.

Morsi supporters remain defiant while rallies supporting the Brotherhood continued on Thursday. The Interior Ministry said the headquarters of the Giza governorate was stormed and set on fire by Morsi supporters.

They also gathered at Al Amin Mosque, two streets away from Rabaa Square, to mourn those lost on Wednesday and to pledge revenge.

On the other side of town, police mourned their colleagues killed during the same clashes.

Families had hoped to bury their dead on Thursday, but several of them said they were unable to obtain the proper permits.

The Health Ministry wanted them to accept death certificates that said their relatives committed suicide, they said.

Residents say they are tired of the violence.

Human Rights Watch, the US-based rights monitor, has condemned the violence in Egypt, saying it holds the government responsible for the Cairo killings.

The state of emergency is set to run for a month, despite the Muslim Brotherhood calling for yet another mass demonstration on Friday. 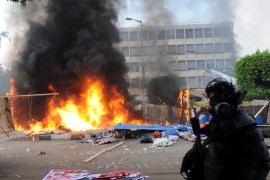 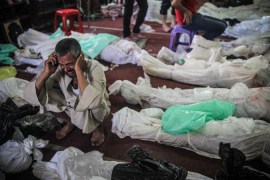