Egypt’s cabinet has tasked police to take “all necessary measures” to end protests by supporters of ousted president Mohamed Morsi, warning that their demonstrations pose a national security threat.

“The continuation of the dangerous situation in Rabaa al-Adawiya and Nahda squares, and consequent terrorism and road blockages are no longer acceptable given the threat to national security,” it said in a statement on Wednesday.

Following the announcement, the US state department urged Egypt to respect the right of peaceful assembly.

Morsi’s supporters have been camped out in both squares demanding his reinstatement.

“The government has decided to take all necessary measures to confront and end these dangers, and tasks the interior minister to do all that is necessary in this regard, in accordance with the constitution and law,” the statement read.

Al Jazeera’s Dorothy Parvaz, reporting from Cairo, said the statement from the government did not deter the protesters.

“Despite the Cabinet decision to clear the sit-ins, a steady stream of people is pouring into the already crowded Rabaa vigil in Nasr City.”

Amnesty International said the government’s decision to mandate security forces to end the pro-Morsi rallies is a “recipe for further bloodshed”.

“Given the Egyptian security forces’ record of policing demonstrations with the routine use of excessive and unwarranted lethal force, this latest announcement gives a seal of approval to further abuse,” said Hassiba Hadj Sahraoui, deputy director for the Middle East and North Africa at Amnesty.

“The authorities as well as the security forces should start with an approach that avoids the use of force and is based on ‘methods of persuasion, negotiation and mediation’, as recommended by international standards,” Hadj Sahraoui added.

Khalil Anani, a specialist on Islamist movements and the author of The Muslim Brotherhood in Egypt, speaking to Al Jazeera from Cairo, also said that the mandate had the potential to add fuel to the current political process and that he feels that violence and bloodshed can be expected over the following days.

He said he felt that that it would also complicate the political process.

Minutes before the government handed out the statement, authorities said they referred the leader of the Muslim Brotherhood, Mohammed Badie, and two other senior movement officials to a court on charges of inciting violence.

The move is certain to deepen tensions between Islamists and the military, who removed Egypt’s Islamist president, Mohamed Morsi, from power on July 3. 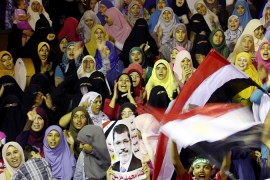 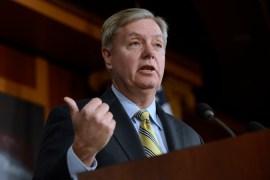 John McCain and Lindsey Graham accept invite, warning against recent violence and saying they will press for elections.