Top judge Adly Mansour has been sworn in as Egypt interim president, hours after Mohamed Morsi was overthrown in a military coup following huge protests against his one-year rule.

Mansour took the oath of interim president on Thursday, as his democratically elected predecessor, Mohamed Morsi, was held in an unspecified military barracks along with senior aides.

Before the constitutional court, Mansour said: “I swear by God to uphold the Republican system and respect the constitution and law… and safeguard the people and protect the nation.”

“The revolutionaries of Egypt are everywhere and we salute them all, those who prove to the world that they are strong enough, the brave youth of Egypt, who were the leaders of this revolution.”

Speaking to journalists after being sworn in, Mansour said the Muslim Brotherhood were part of the people and were welcome to help “build the nation”.

“[…] Nobody will be excluded, and if they responded to the invitation, they will be welcomed,” he said.

Separately, Mansour was made head of the supreme constitutional court – a position he was due to take on June 30, when protests against Morsi’s one year in power began in earnest.

Egyptian judicial authorities opened an investigation into accusations that Morsi and 15 other Islamists had insulted the judiciary, investigating judge Tharwat Hammad said, imposing a travel ban on all of them.

The Brotherhood’s top leader, Mohamed Badie, and his deputy, Khairat el-Shater, were among those investigated, judicial and army sources told Reuters news agency.

Shater was the group’s first choice candidate to run in last year’s presidential election. He was disqualified from the race due to past convictions.

Hundreds of Muslim Brotherhood officials were also reported to have been arrested, with many senior leaders being held in the Torah prison in Cairo – the same prison holding Hosni Mubarak, who was himself deposed in the 2011 revolution.

A senior Muslim Brotherhood leader said on Thursday that the Islamist group will not take up arms in response to the coup.

“This is a military coup. We will remain and deprive it of legitimacy until it is corrected,” Mohamed El-Beltagy told reporters at a pro-Morsi sit-in outside a mosque in Cairo.

Sisi called for presidential and parliamentary elections, a panel to review the constitution and a national reconciliation committee that would include youth movements. He said the roadmap had been agreed by a range of political groups.

Islamist supporters of Morsi who have gathered in a Cairo suburb reacted angrily to the announcement by the army.

Some broke up paving stones, forming piles of rocks. Muslim Brotherhood security guards in hard hats and holding sticks formed a cordon around the encampment, close to a mosque. Men and women wept and chanted.

Denouncing military chief Sisi, some shouted: “Sisi is void! Islam is coming! We will not leave!”

At least 14 people were killed when opponents and supporters of Morsi clashed after the army announced his removal,  officials said. Eight of those died in the northern city of Marsa Matrouh, including two members of the security fources.

Three people were killed and at least 50 wounded in Alexandria, state news agency MENA reported; a woman stabbed in the stomach, and two men killed by birdshot.

Three people were also killed and 14 wounded in the southern city of Minya, including two police, MENA said.

Speaking shortly after Sisi’s announcement on Wednesday evening, liberal opposition leader Mohamed ElBaradei said the “2011 revolution was re-launched” and that the roadmap meets the demand of the protesters.

Pope Tawadros, the head of the Coptic Church, said the plan offered a political vision and would ensure security for all Egyptians, about 10 percent of whom are Christian.

Egypt’s second largest Islamist group, the Nour party, said in a statement that it agreed to the army roadmap in order to avoid further conflict.

Morsi came under huge pressure in the run-up to Sunday’s anniversary of his maiden year in office, with his opponents accusing him of failing the 2011 revolution by concentrating power in Islamist hands.

The embattled 62-year-old proposed a “consensus government” as a way out of the crisis.

That was not enough for the army, and Mansour, a previously little known judge, was installed as the country’s interim leader. 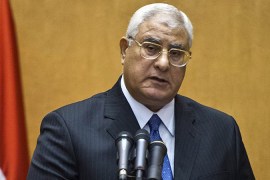 Former head of Supreme Constitutional Court was sworn in as Egypt’s interim president one day after Morsi’s ouster. 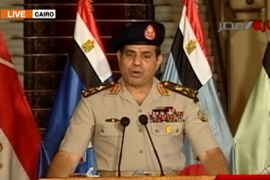