Cambodia’s government has rejected calls by the opposition for an international inquiry into allegations it used massive fraud to win re-election.

The US and EU have expressed concern about irregularities in Sunday’s election, but both said an investigation should be conducted by Cambodian electoral authorities, failing to endorse the opposition’s call for an inquiry involving the UN.

“We call for a transparent and full investigation of all credible reports of irregularities,” Jen Psaki, US State Department spokeswoman, said.

Opposition leader Sam Rainsy on Monday called for the creation of a special committee including representatives from both parties, as well as local and international experts to investigate the allegations.

“The committee has just to confirm that irregularities are so widespread that they have distorted the will of the Cambodian people,” Rainsy told Al Jazeera.

The government announced on Sunday that the Cambodian People’s Party (CPP) of long-serving Prime Minister Hun Sen had won 68 seats in the 123-seat parliament, a sharp fall from its previous tally of 90.

The government said it wanted parliament to approve a new cabinet quickly.

But the opposition Cambodia National Rescue Party (CNRP), which nearly doubled its seat total to 55, could delay it as a quorum of 120 out of 123 legislators is needed in parliament to approve a new cabinet.

Rainsy said up to 1.3 million names had been missing from the electoral rolls and complained about lack of access to the media as well as intimidation on the campaign trail.

Prolonged wrangling over the result and a weakened Hun Sen could raise uncertainty over policy in the small but fast-growing Southeast Asian country that has built up a thriving garment sector and forged economic ties with China and Vietnam.

“We urge all parties and their supporters to continue to act in an orderly and peaceful manner in the post-election period,” the State Department’s Psaki said. 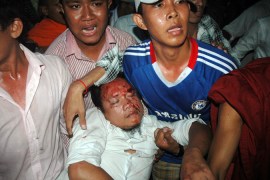 Q&A: How credible was Cambodia’s election? 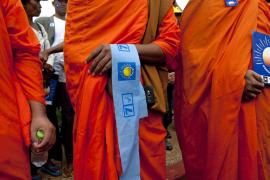 In Pictures: Campaigning in Cambodia

Political parties campaign in Phnom Penh ahead of Cambodia’s National Election on Sunday. 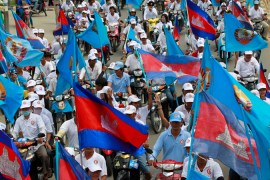 Prime Minister Hun Sen’s CPP say it has won 68 of 123 parliamentary seats, a drop from the 90 it held before.