Supporters and opponents of Egypt’s deposed president began mass protests called for by the army chief, and later by members of the Muslim Brotherhood, in a struggle over the country’s future.

Egyptians joined street rallies on Friday, with many heeding a call earlier in the week from General Abdel Fattah El Sisi, the head of the army, who urged them to strengthen a military “mandate” to stop “violence and terrorism”.

Many supporting Sisi’s stance gathered at Tahrir Square by the afternoon, while more people joined thousands of Morsi supporters at Nasr City.

The pro-Morsi crowd has been rallying against his overthrow and holding demonstrations since July 3. The Muslim Brotherhood has called on its supporters to help fill the streets in solidarity.

In another development on Friday, reports said Morsi was being detained for 15 days pending investigations on allegations of him spying for Hamas, which controls the Gaza Strip.

Ban also urged Egyptians to protest peacefully and called on the interim leadership to ensure security.

Confrontation appeared likely on Friday following a month of clashes in which close to 200 people, mainly supporters of Morsi, have died.

There were brief clashes in Shubra, a neighbourhood in central Cairo, when pro- and anti-Morsi demonstrators crossed paths and threw rocks at each other. Ten people were injured.

The Egyptian health ministry also reported six people injured in clashes in Damietta, in the Nile Delta. Health officials say 15 were hurt in the northern city of Alexandria, where rival protesters fought outside of Qaid Ibrahim mosque, a common flashpoint during demonstrations.

The army has deployed heavily on the streets and threatened to “turn its guns” on those who use violence, while the Brotherhood has warned of civil war.

“We will not initiate any move, but will definitely react harshly against any calls for violence or black terrorism from Brotherhood leaders or their supporters,” an army official told the Reuters news agency.

On Thursday, rival protests filled Cairo’s main squares, with Morsi supporters camping in Nasr City and those who supported the decision to remove him from power holding demonstrations in Tahrir Square.

“Tomorrow we will cleanse Egypt,” said Mohammed Abdul Aziz, a spokesman for the Tamarod (“Rebel”) youth movement that helped rally millions in anti-Morsi street protests before the army moved against him.

“There are men carrying guns on the street,” he told Reuters. “We will not let extremists ruin our revolution.”

Friday’s rallies are expected to pick up pace after Friday prayers, and more people are likely to join gatherings following the first evening prayer which will mark the end of the day’s Ramadan fast.

Witnesses said army helicopters had dropped flyers at the Brotherhood vigil calling on people to refrain from violence.

The interior ministry has said it will take “unprecedented measures to protect citizens and their property”.

The country remains deeply split over the overthrow of Morsi, who was Egypt’s first democratically elected president.

The Brotherhood accuses the army of removing him in a long-planned coup, while its opponents say the army responded to the will of the people.

On Thursday, Washington said it did not intend to decide whether to class the removal of Morsi as a coup, in a move that avoids the cut-off of US aid.

William Burns, the US deputy secretary of state, told members of the Congress that the administration was not legally bound to draw any conclusion, and doing so would not be in the interests of the US.

“We believe that the continued provision of assistance to Egypt, consistent with our law, is important to our goal of advancing a responsible transition to democratic governance,” the official said. 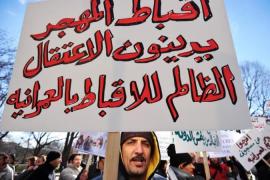 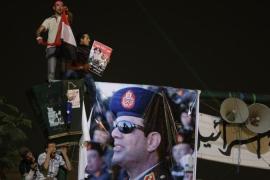