The Free Syrian Army (FSA) and al-Qaeda-linked fighters have clashed again, just days after a leader of the FSA was shot dead at a checkpoint after a row between fighters from the two groups.

Activists told Al Jazeera that the FSA and the Islamic State of Iraq and the Levant (ISIL) on Saturday fought for control of a strategic checkpoint in Aleppo city’s Bustan al-Qasr district, a strategic gateway between rebel and government controlled territory.

Some members of the groups now fear that tensions will escalate, hampering rebel efforts to overthrow President Bashar al-Assad. Analysts say divisions between Syria’s rebel groups are partly to blame for giving Assad’s forces the chance to regain the upper hand in the conflict.

Leaders of the Western- and Arab-backed FSA told Al Jazeera that they did not consider the ISIL an enemy, but that they would defend themselves.

“They are welcome if they help us fight the regime,” Colonel Abdel Rahman Suweis, a member of the FSA Supreme Military Council, said.

“But if they want to cause strife, impose a new understanding of religion and make Syria another Afghanistan, we will take the necessary measures.”

While FSA units sometimes fight alongside groups with different ideologies, rivalries have increased and al-Qaeda-linked groups have been blamed for assassinations of commanders of moderate rebel units.

Meanwhile, hundreds of families were trapped in a northeastern district of Qaboun in Damascus by government troops who fought fierce battles with rebel forces, the Syrian Observatory for Human Rights, a UK-based anti-government rights group, reported.

“There is a siege because regime snipers are posted on the outskirts of Qaboun and this makes any attempt to leave difficult,” the group said on Sunday.

“Violent clashes are underway between regime forces and rebels in Qaboun,” in northeast Damascus where battles have raged for months as the army tries to boot out rebel forces, the Observatory said.

“The area has also been bombed by the army,” added the watchdog, which relies on a network of activists, doctors and lawyers on the ground. 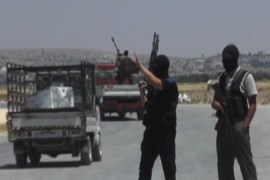 Al-Qaeda’s Syrian branch has been cementing control of villages near Turkey’s border and aims create an Islamic state. 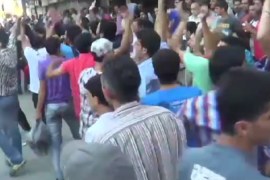 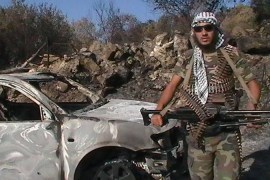 Commander shot in the head by al-Qaeda-linked fighters in attack that signals growing strife between rebel groups.