German authorities have urged thousands of people to evacuate parts of a city on the swollen Elbe river as the floods in central Europe continued to cause havoc in the Czech Republic, Austria and Hungary.

The Elbe in the eastern German city of Magdeburg was at a record level on Sunday – higher than had been forecast.

About 15,000 people were moved to safety after the river broke its banks when dykes burst in a number of places.

A torrent of flood waters in Germany has turned vast areas into a brown water world, sparking a mass mobilisation of troops, firefighters and volunteers and causing billions of dollars in property damage in what one legislator termed a “national catastrophe”.

In Magdeburg, authorities urged residents to clear out of the eastern bank of the river, where an almost 7.5 metre peak – up from the normal level of two metres – was expected to strain saturated dykes for the next few days.

“We hope that the dykes will withstand the pressure over the coming days, but we can’t be 100 percent sure,” said fire brigade spokesman Andreas Hamann, one of 1,200 emergency staff working around the clock in the area.

The move was described as a precaution, but a city spokesman said “people really are supposed to leave” in face of the danger.

Across central Europe, the floods have killed at least 18 people, including 10 in the Czech Republic.

The 15,000 Germans who were told to flee raised the total number of evacuations this weekend in and around Magdeburg to 23,500, the interior ministry of Saxony-Anhalt state said.

Vast areas around 1,200-year-old Magdeburg were covered in a sea of muddy water sparked by torrential rains which have washed down the Elbe river system from the Czech Republic, where many villages were left flooded and isolated last week.

The water level in Magdeburg was higher than during “once-a-century” floods of 2002, local authorities said.

Regional rains have also severely swollen the Danube, hitting southern Germany, where residents in Passau have in past days returned to wrecked homes to clear out mud-caked furniture and debris.

The deluge has sparked massive emergency responses downriver in Austria, Slovakia and in Hungary, where flood defences held firm on Sunday as waters reached a new record in Budapest.

Al Jazeera’s Jonah Hull, reporting from Tahitotfalu, one of the areas most at risk, said the water levels were still rising.

“The flood defences here are holding quite well. The major centre of concern continues to be the capital Budapest downstream, where officials said everything should be fine, but there is a stench of sewage in the air as sewage systems are backup and overflowing.”

The mayor of Budapest sought to ease concerns, saying water levels were stabilising, although about 1,200 people have been evacuated along the river.

“Budapest is not at risk of a catastrophe, the level is not expected to rise significantly,” Mayor Istvan Tarlos said, adding that city authorities had been able to fix leaking dykes.

“Of course anything can happen, but we have every reason to believe that Budapest will survive its biggest flood of all time,” said Imre Pesti, head of the city’s defence team.

Authorities said Budapest flood barriers are high enough to protect the capital, where the river was forecast to peak at 8.95 metres later on Sunday. 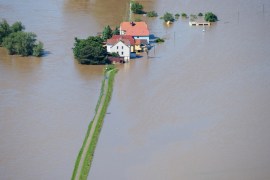 The rain may have eased, but more flooding is expected 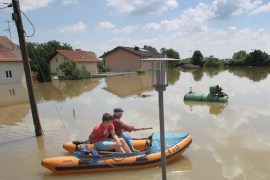 Thousands of rescuers evacuate flood-hit Germans, but some still cut off. 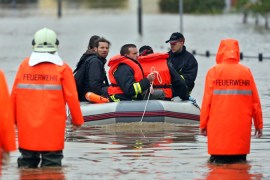 Death toll at eight as floodwater rises to highest levels in some regions in almost 70 years.