Bradley Manning, an American soldier, faces life in prison as his trial gets under way in Fort Meade, in the US state of Maryland, three years he was charged with providing highly sensitive material to anti-secrecy website WikiLeaks.

The 25-year-old army private has admitted turning over hundreds of thousands of documents to the anti-secrecy website WikiLeaks, pleading guilty earlier this year to charges that could bring 20 years behind bars.

Even then, the US military pressed ahead on Monday in a military courtroom outside Washington DC with a court-martial on more serious charges, including aiding the enemy, which carries a potential life sentence.

Manning’s supporters gathered outside the military base and about 20 of them, including Cornel West, the Princeton University professor and civil rights activist, and Medea Benjamin, a member of protest group Code Pink, were in the courtroom.

Manning’s lawyers said he was a “young, naive but good-intentioned” soldier whose struggle to fit in as a gay man in the military made him feel he “needed to do something to make a difference in this world.”

Prosecutors, however, said they would present evidence that Osama bin Laden requested and obtained from another al-Qaeda member Afghanistan battlefield reports and State Department cables published by WikiLeaks.

“This is a case about a soldier who systematically harvested hundreds of thousands of documents from classified databases and then dumped that information onto the internet into the hands of the enemy,” Captain Joe Morrow, prosecutor, said.

He said the case is “about what happens when arrogance meets access to sensitive information”.

Manning chose to have his court-martial heard by a judge instead of a jury. It is expected to run all summer.

Wearing his dress blue uniform, the slightly built Manning peered through his small eyeglasses at a slide show of Morrow’s hour-long opening statement, watching on a laptop computer at the defence table.

The slide show also was projected on three larger screens in the courtroom, which had seats for only about 50 people.

Coombs said Manning struggled to do the right thing as “a humanist”, a word engraved on his custom-made dog tags.

As an analyst in Baghdad, Manning had access to hundreds of millions of documents but selectively leaked material, Coombs said.

He mentioned an unclassified video of a 2007 attack by an Apache helicopter that mistakenly killed civilians, including two Reuters news staff, photographer Namir Noor-Eldeen and driver Saeed Chmagh.

“He believed this information showed how we value human life. He was troubled by that. He believed that if the American public saw it, they too would be troubled,” Coombs said.

Coombs did not address whether bin Laden ever saw any of the material. The soldier has said he did not believe the information would harm the US.

Coombs said Manning struggled privately with gender identity early in his tour of duty, when gays could not openly serve in the military.

“His struggles led him to feel that he needed to do something to make a difference in this world,” Coombs said.

“He needed to do something to help improve what he was seeing.”

Manning apparently downloaded hundreds of thousands of classified US documents onto CDs to smuggle them out of secure military surroundings in Iraq in 2010, according to testimony heard on Monday.

He then labelled at least one CD “secret” and hid it behind a language-learning CD in a plastic case bearing the label, “Starting Out in Arabic,” according to witness testimony.

Thomas Smith, an army investigator, was the first to take the stand after opening arguments from the prosecutor and defence attorney.

Smith launched the investigation into the massive leak of US secret documents in late May 2010.

After evidence had been collected and catalogued from the operations room in Iraq where Manning worked as a military analyst, Smith turned to searching Manning’s room.

Smith testified how he confiscated numerous writable CDs in the room, Manning’s private Apple computer and a label maker, which he said was used to print clear labels for each CD.

Manning appeared to have wanted to thoroughly label the purloined content he was smuggling out.

The items in the room were not locked away, but lying out in the open.

Earlier this year, in a statement Manning read to the court during pre-trial hearings, he explained why he put the stickers onto the CDs.

He said his plan was to release the information to Reuters news agency.

Later in the day, the court also heard from two army investigators and Manning’s roommate in Iraq, who testified the soldier was online whenever he was in their quarters.

Much of the evidence is classified, which means large portions of the trial are likely to be closed to reporters and the public.

Federal authorities are looking into whether Julian Assange, the WikiLeaks founder, can also be prosecuted.

Assange, who has taken refuge in the Ecudorean embassy in London since June 2012 to avoid extradition to Sweden for alleged sex crimes, told Al Jazeera that the Manning case is a matter of international diplomatic significance as it “involves every country on earth”.

“In order for there to be justice, there has to be public oversight,” he said, adding that the prosecution for Manning’s proceedings intend to call 141 witness, out of which at least 31will have their testimony kept “completely secret”.

In February, Manning took the stand and read from a 35-page statement in which he said he leaked the material to expose the American military’s “bloodlust” and disregard for human life in Iraq and Afghanistan.

The case is the most prominent prosecution for the Obama administration, which has been criticised for its crackdown on leakers.

The six cases brought since Obama took office are more than in all other presidencies combined.

The WikiLeaks case is by far the most voluminous release of classified material in US history, and certainly the most sensational since the 1971 publication of the Pentagon Papers, a secret Defence Department history of US involvement in Vietnam.

The material WikiLeaks began publishing in 2010 documented complaints of abuses against Iraqi detainees, a US tally of civilian deaths in Iraq, and America’s weak support for the government of Tunisia – a disclosure that Manning supporters said helped set off the Middle Eastern pro-democracy uprisings known as the Arab Spring. 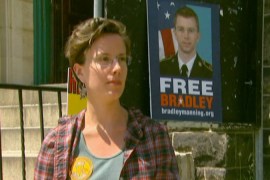 Sarah Shourd, who spent more than a year in solitary confinement in Iran, calls for Bradley Manning’s release. 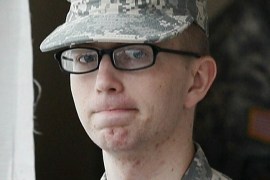 We discuss Private Bradley Manning’s motives for leaking thousands of classified US documents. 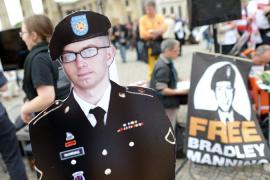 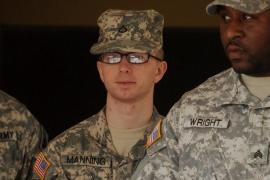 Psychiatrists treating US army private suspected of leaking classified documents say he should not be on suicide watch.