A violent storm system that led to tornadoes and flooding across Oklahoma, Missouri and Arkansas over the weekend has killed at least 13 people, including three storm chasers.

The system was moving on Sunday towards the east coast, causing rain and thunderstorms from Quebec City in Canada to Philadelphia, according to AccuWeather meteorologists.

The town of Bennington, Vermont, was covered by more than half a metre of water.

St Louis, Missouri, could be threatened by flooding in coming days as the Mississippi River reached 11.6 metres, well above the flood stage of 9.1 metres, the National Weather Service said.

Officials on Sunday raised the death toll to at least 13 in Oklahoma, and said at least six more people were still unaccounted for.

Some bodies were found in storm drains where people had sought shelter on Friday night from the tornado, said Keith Bryant, the Oklahoma City fire chief.

Three tornado monitors died in the twister that moved through El Reno in Oklhaoma.

Tim Samaras, 55, was founder and director of Twistex, a tornado research firm. His son Paul and Carl Young, another storm chaser, also died in the storm.

The team was monitoring the tornado when it took an unexpected sharp turn, crushing their vehicle and flinging its engine one kilometre away, reports said.

CNN showed footage of what it said were the remains of the vehicle, which appeared crushed almost beyond recognition.

National Geographic called Samaras one of the world’s best-known storm chasers, saying he spent the past two decades pursuing his passion.

It said he developed his interest in twisters after watching the film The Wizard of Oz when he was just six years old.

His instruments are said to have offered the first-ever glimpse inside a tornado.

In a post on the social media four days before he died, Tim Samaras wished fellow storm chasers well.

“Everyone enjoy the chase – and hope that tornadoes wander over open country,” he wrote. 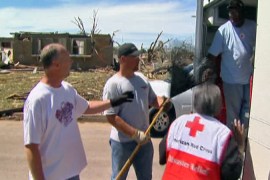 US volunteers work through Oklahoma rubble

Strangers line up to offer assistance as tornado survivors start to rebuild their lives. 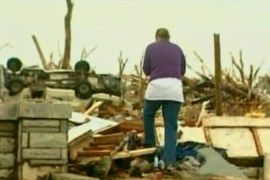 US tornado victims given hope of renewal

Destroyed Oklahoma suburb hopes to rebuild after model of nearby Greenburg that was hit six years ago. 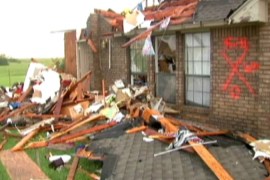 Flooding in the wake of tornadoes is bringing more misery to Oklahoma and surrounding regions.