Nairobi, Kenya – Barack Obama’s first extensive trip to sub-Saharan Africa as US president is a week-long diplomatic safari aimed at allaying concerns that Washington has little interest in some of the world’s fastest-growing economies.

Many Africans complain the United States’ first black president has neglected the continent since assuming office; re-jigging foreign policy to Asia and visiting sub-Saharan Africa only once – a fleeting day-long stop in Ghana in 2009.

The first is Goree Island, off West Africa’s coast, home to a slave museum and the “door of no return”, through which manacled Africans began transatlantic passages. The second is Robben Island in South Africa, where Nelson Mandela was jailed for 18 of his 27 years’ incarceration under white apartheid rule.

In 2008, Mandela, an icon of Africa’s struggle against white dominion, said Obama’s election proved Africans should “dare to dream”. The 94-year-old languishes in a Pretoria hospital, reportedly on life support, with a lung infection.

White House spokesman Jay Carney said Obama sees the Nobel laureate as an inspirational “personal hero”. The US president will pay tribute to Mandela, but officials say any meeting depends on the anti-apartheid leader’s health and the wishes of his family.

There are other countries getting in the game in Africa - China, Brazil, Turkey ... if the US is not leading in Africa, we're going to fall behind in a very important region of the world.

Emmanuel Kisiangani, an analyst for the leading African think-tank, the Institute for Security Studies, said this visit is an opportunity for Obama to demonstrate more interest in sub-Saharan Africa’s 875 million people.

“There was a lot of expectation when Obama became president that he would be more favourable to the continent – but that turned out differently,” he told Al Jazeera. “His predecessor, George W Bush, was in many ways more positive for Africa because of his massive funding for combating AIDS.”

While the three-nation expedition allows Obama to re-connect with his African roots, Kenya – the country of his father’s birth and home to many of his family members – does not feature on the travel itinerary.

Ahead of Kenya’s elections in March, a top Obama administration official warned Kenyans that “choices have consequences”. It was widely interpreted as a signal to reject the candidacy of Uhuru Kenyatta, who faces charges of crimes against humanity in the International Criminal Court.

Kenyatta, the son of the country’s first president, is accused of contributing to murder, deportation, rape, persecution and inhumane acts allegedly committed by his supporters in the ethnic violence that claimed more than 1,000 lives after the 2007 elections. He denies any wrongdoing.

Voters nevertheless gave Kenyatta a first-round win. Obama’s decision to skip East Africa’s biggest economy is interpreted as a snub to Kenyatta and his paternal home. “It just wasn’t the best time for the president to travel to Kenya,” said deputy national security adviser Ben Rhodes.

The countries being graced by the leader of the free world are “strong democracies”, added Rhodes. The White House message is that democratic institutions and rule of law provide a solid footing for long-term economic growth, he told reporters.

The visit carries the pomp of a state visit and the price-tag of a big security operation. The Washington Post estimates costs of up to $100m, with fighter jets, a navy ship with an on-board emergency clinic, and truck-loads of bullet-proof glass.

But price is a factor. An excursion to Tanzania’s savannah grasslands was rejected because it would have required a special counter-assault team armed with sniper rifles, ready to gundown cheetahs, lions or other predators that dared stalk the president or his wife, Michelle.

Africa was a political risk to him, so he appeared aloof. Because of this, and China's economic rise on the continent, the US is playing catch-up.

US firms have been eyeing the region’s business promise. The International Monetary Fund predicts that sub-Saharan Africa’s economy will grow by 5.4 percent this year and 5.7 percent next year, outpacing the expected global averages of 3.3 percent and 4 percent, respectively.

“There are other countries getting in the game in Africa – China, Brazil, Turkey,” said Rhodes. “If the US is not leading in Africa, we’re going to fall behind in a very important region of the world.”

China’s trade with Africa has grown from about $10bn in 2000 to $166bn in 2011, mostly an exchange of African raw materials for Chinese goods. Last month, Brazilian President Dilma Rousseff said she would cancel or restructure nearly $900m of debt owed by a dozen African nations.

“Africa presented Obama with a conundrum. He had to be seen as an American president, rather than an African-American,” he told Al Jazeera. “Africa was a political risk to him, so he appeared aloof. Because of this, and China’s economic rise on the continent, the US is playing catch-up.”

US officials now point to Africa’s demographic “youth bulge”. Nearly one-in-three Africans are aged 10-24 and, according to US secretary of state John Kerry, “Africa will become 40 percent of the entire world’s workforce” within the next 35 years.

While behind the investment curve, the United States remains a regional military heavyweight. US drones operate from several African bases, and American muscle and know-how fights such hardline groups as Somalia’s al-Shabab, the Lord’s Resistance Army in Uganda, and Nigeria’s Boko Haram.

Pressure groups have jumped on the presidential bandwagon. US-based Human Rights Watch warns that journalists and activists are killed, jailed and harassed from Eritrea to Zimbabwe. Obama should “recognise the courage of [those] who speak the truth in the face of threats and reprisals”, said the group’s Daniel Bekele.

British rights group Amnesty International said threats against gays and lesbians are reaching dangerous levels in Africa, where lawmakers are toughening anti-homosexual laws. Obama’s “silence would be seen as indifference to their suffering”, added the group’s Adotei Akwei. 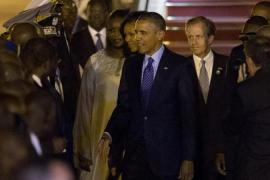 Obama in Senegal on Africa tour

US president arrives in Dakar on first leg of three country tour expected to focus on economy and democracy. 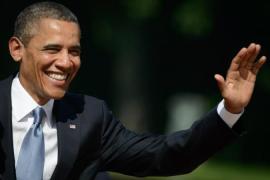