The Qatari emir is due to address the nation after confirming that he will step down and transfer power to his heir apparent.

A day earlier, he met royals and prominent members of the Qatari society where he announced plans for a transition to his son, Sheikh Tamim bin Hamad Al Thani.

Sheikh Tamim, 33, has been groomed for the position since 2003, when his elder brother stepped aside.

Sheikh Hamad has been in power since 1995, during which Qatar has evolved into an important player on the regional and international political scenes.

Abdullah al-Athbah, the managing editor of Al Arab newspaper, earlier told Al Jazeera that he did not expect to see a change in policy after the succession.

“The heir apparent has been very close to his father and Sheikh Jassim,” he said, referring to Qatar’s prime minister. “I don’t think there will be a big change in policy, foreign or domestic.”

Tuesday was declared a public holiday in Qatar.

The Qatari Emiri Diwan announced it would receive citizens on Tuesday and on Wednesday to pledge allegiance to Sheikh Tamim as the new emir of Qatar.

The British-educated Sheikh Tamim is deputy commander of the armed forces and head of the National Olympic Committee. He also chairs the Qatar 2022 Supreme Committee which is in charge of hosting the 2022 FIFA World Cup. 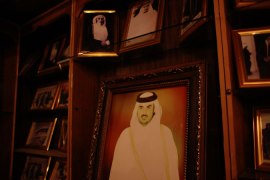 Citizens share memories of life under Sheikh Hamad bin Khalifa Al Thani as they welcome his son as the new leader. 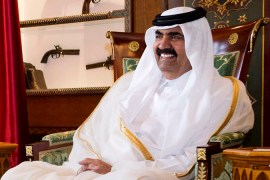 A new ruler for a transformed country