A shootout that killed an opposition activist cast a shadow over Albania’s crucial general election, with both sides claiming victory in a vote that could determine whether one of Europe’s poorest countries has a chance of joining the EU.

The first official preliminary results for Sunday’s election of the members of the 140-seat assembly were expected on Monday or no later than 72 hours after the polls close, as mandated by the law.

But the electoral commission – the agency in charge of certifying results – remains paralysed as it has not yet replaced three of its seven members who quit in April over a dispute between the government and the opposition.

In the absence of preliminary results, the ruling coalition of Sali Berisha, the outgoing prime minister. and Edi Rama, his rival Socialist leader, both told supporters they had won.

Both Rama and Berisha have pledged to improve living standards in the country where many, especially in the poor mountainous north, depend heavily on financial aid sent by an estimated 1.5 million countrymen living in Western Europe and the US.

Berisha, a 69-year old cardiologist, has been campaigning on the promise of new investments, and also a six percent increase in wages and pensions to take effect after the election.

Rama, a Paris-schooled painter, has insisted on rooting out widespread corruption in Albania, which ranked 113th of 174 countries on corruption watchdog Transparency International’s 2012 list.

“The Renaissance has won,” Rama, the 48-year-old former mayor of Tirana, said of his leftist coalition.

The Socialists based their claims on the exit poll released by a private TV station which said that Rama’s coalition was leading the vote with 55.5 percent compared to 43.5 won by Berisha’s bloc.

But just a few blocks away, Berisha said in his Democratic party headquarters that he was “convinced of our great victory.”

Berisha’s party quoted an exit poll carried out by a private research group which said their coalition led the vote with 48 percent, compared to their rivals with 46 percent.

But fears of violence were high after a 53-year-old activist in Rama’s coalition was killed in a shootout in the northern town of Lac.

Police said a rival candidate for parliament from Berisha’s party was wounded along with two others.

A police spokeswoman said the shootout “might be related to the vote” and had started with an “argument.”
Police detained seven people after the incident, she said.

Rama branded the shooting a “serious political incident … aimed at intimidating the voters”.

“Berisha should take responsibility… and pay for it,” Rama said after rushing to Lac.

Brussels, which has twice rejected Albania’s EU membership application, said Sunday’s polls “represent a crucial test for the country’s democratic institutions and its progress towards the European Union”.

Having failed to deliver clean elections since the fall of communism two decades ago, Albania desperately needs to prove that it is able to hold fair polls that meet international standards if it is to have a shot at joining the European bloc.

Both sides have been accusing each other of vote-buying and electoral roll irregularities, raising concerns there could be a repeat of the 2009 polls which prompted months of political turmoil and government paralysis.

Central Electoral Commission said it had allowed several polling stations to remain open after the 1700 GMT closing time as some of the 3.2 million eligible voters were still waiting to cast their ballots.

Berisha, seeking his third mandate to lead the Muslim majority nation after eight years in power, has pledged that “the will of the citizens shall be respected”.

Eugen Wollfarth, head of the Organisation for Security and Cooperation in Europe (OSCE) mission in Tirana, called on politicians to “consider what is best for the country,” which became a NATO member in 2009. 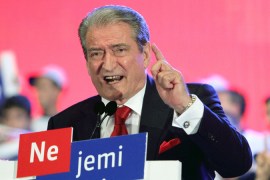 Vote for 140-seat assembly could determine whether one of Europe’s poorest countrys will have chance of joining the EU. 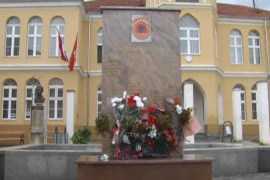