Rescuers have found bodies in the River Ganges and in the muddy, broken earth left by landslides, raising the death toll from monsoon flooding in mountainous northern India to nearly 600, officials have said.

The air force dropped paratroopers, food and medicine for people trapped in up to 100 towns and villages cut off since Sunday in the Himalayan state of Uttarakhand where thousands of people are stranded, many of them Hindu pilgrims.

Uttrakhand state Chief Minister Vijay Bahguna told a local TV channel, CNN-IBN, that 556 bodies have been noticed buried deep in slush and the army was trying to recover them.

Home Minister Sushilkumar Shinde told reporters in the capital, New Delhi, that 34,000 people have been evacuated so far and another 50,000 were stranded in the region. Roads and bridges were washed away by the floods or blocked by debris.

The temple escaped major damage, but debris covered the area around it and television images showed the bodies of pilgrims strewn around the area.

More than 2,000 vehicles carrying stranded Hindu pilgrims have moved out of the area since late on Thursday, he said.

Thirty-six air force helicopters have been ferrying rescue workers, doctors, equipment, food and medicine to Kedarnath, the town closest to many of those stranded, said Priya Joshi, an air force spokeswoman.

Another seven aircraft carried paratroopers and fuel to the region.

Hundreds of people looking for relatives demonstrated in Dehradun, the Uttrakhand state capital, where flood survivors were taken by helicopters.

They complained that the government was taking too long to evacuate the survivors, with small helicopters bringing in four to five people at a time.

Jasveer Kaur, a 50-year-old housewife, said she and her family survived by taking shelter in a Sikh shrine, which withstood the flood, located in Govind Dham.

“There was destruction all around,” said Kaur after she was evacuated by an air force helicopter. “It was a nightmare.”

Google has launched an application, Person Finder, to help trace missing people in Uttarakhand. The version is available in both Hindi and English languages, according to a Google India blog. 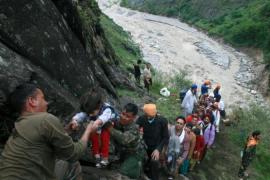