Singapore’s prime minister has said that the thick smog shrouding the city could last for weeks, as the smoke drove air quality “hazardous” levels and disrupted business and travel in the region.

Air quality has deteriorated to “hazardous” levels in both Singapore and Malaysia over the past few days as smoke from forest fires in Indonesia obscured skies and disrupted businesses and travel.

“It can easily last for several weeks and quite possibly longer until the dry season ends in Sumatra,”  Lee Hsien Loong said on Thursday, warning of action if Singapore-linked companies were behind the burning.

“On the scale of it, it’s unlikely to be just small stakeholders slashing and burning.”

Earlier on Thursday, Agung Laksono, the minister who is coordinating Indonesia’s response to the haze crisis, accused Singapore of “behaving like a child” by complaining about severe haze from raging forest fires on Sumatra island that has cloaked the city-state.

“Singapore should not be behaving like a child and making all this noise,” he told reporters in Jakarta.

Laksono was responding to Singapore’s demands earlier on Thursday for “definitive” action by Indonesia to quell forest fires raging in Sumatra.

A technical meeting between Indonesian and Singaporean officials is scheduled during which Indonesia will share information on what it has been doing and will listen to concerns from Singapore.

Work at several Singapore construction sites slowed with few workers seen outdoors while the city-state called on Indonesia to do something.


“No country or corporation has the right to pollute the air at the expense of Singaporeans’ health and well-being,” Singapore’s Environment and Water Resources Minister Vivian Balakrishnan said on his Facebook page.

Balakrishnan said Singapore had sent officials to an emergency haze meeting in the Indonesian capital, Jakarta.

At 1:00 pm local time on Thursday, the city-state’s pollution standards index (PSI) soared to a new high of 371, indicating air quality had deteriorated to “hazardous” levels, and exceeding the previous record set on Wednesday night.

A PSI reading above 300 indicates “hazardous” air, while a reading between 201 and 300 means “very unhealthy”.

The top PSI readings in Singapore over the past two days have exceeded the peak of 226 reached in 1997 when smog from Indonesian fires disrupted shipping and air travel across Southeast Asia.

Indonesian officials have tried to deflect blame by suggesting companies based in Singapore may be partly to blame for the fires.

Singapore has said it wants Indonesia to provide maps of land concessions so it can act against firms that allow slash-and-burn land clearing.

The illegal burning of forest on Indonesia’s Sumatra island, to the west of Singapore and Malaysia, to clear land for palm oil plantations is a chronic problem, particularly during the June to September dry season.

Singapore, which prides itself on its clean environment and usually enjoys clear skies, saw its air quality deteriorate to unhealthy levels on Monday. 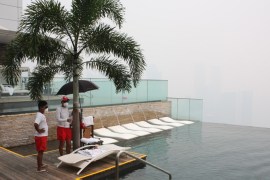 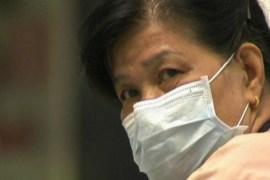 Forest fires send a cloud of smoke and haze over parts of Asia causing worst air pollution in years.