Microsoft is bringing back the “start” button in Windows 8.1, the stripped-down update aimed at winning over tablet users and placating PC customers alienated by Windows 8.

The move is part of effots by the world’s largest software company to re-energise sales of its latest operating system, which has been unpopular with computer users.

Executives say the plan is now to update Windows periodically, rather than waiting three years or so between big releases.

Microsoft said on Thursday the Windows 8.1 update will have a button in the bottom left corner of the screen that acts like the “start” button in previous versions of the system.

It will not be labelled “start” but it features the Windows logo and takes the user straight to a grid of applications.

Windows 8.1, previously known by the code name “Blue”, will be available for free to all Windows 8 users later this year.

Microsoft will make a test version available at its annual developer conference on June 26.

Although the company has sold more than 100 million Windows 8 licenses since October, broadly in line with Windows 7 three years ago, it must tackle a dwindling PC user base and its inability to make a mark in the rapidly expanding tablet market.

Shipments of traditional PCs, the most reliable gauge of Windows’ popularity, are expected to fall almost eight percent this year, while Microsoft’s Surface has taken less than two percent of the tablet market.

Windows 8 was designed to be used both on touch-screen tablets and traditional PCs.

While touch-screen users tend to like the new “tile”-based interface, many mouse and keyboard users complained that the new design was confusing.

Windows 8.1 also includes what the company says is a vastly improved “search” function, which allows a user to search for documents, apps, or items on the internet from a single search bar, like a souped-up version of Apple’s Spotlight feature.

It also allows users to see all their applications immediately in a grid by swiping down or pressing a button on-screen, which should make it easy for unfamiliar users to get to the app they want quickly.

For the first time, it will be possible to open two windows simultaneously in the new-look interface.

Windows 8.1 includes Microsoft’s latest browser, Internet Explorer 11, and lets the user restore the address bar and tabs to the screen view, which was missing in the initial version of Windows 8.

Users will also no longer have to switch to the old desktop view to make changes in their default settings.

But they will still have to switch back to a traditional desktop set-up to use some programs such as Word or Excel, which have not been redesigned to function in the new Windows 8 style. 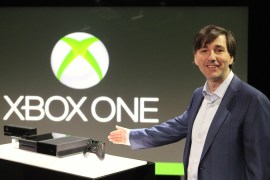 Xbox One will compete with Nintendo’s new Wii U and Sony’s PlayStation 4 for part of $65bn computer game market. 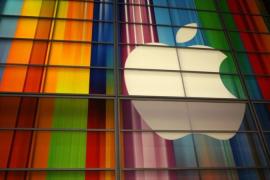 Firm says no customer data stolen as it joins Facebook and Apple on list of recent US corporate victims of cyberattacks. 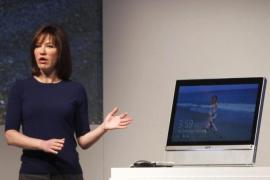 Steven Sinofsky departs only weeks after company launched Windows 8, an overhaul of its computer operating system.