At least 68 people have been killed in a series of bombings in and around the Iraqi capital, police sources tell Al Jazeera.

More than 180 others were injured in Monday’s bombings, several of which targeted markets and shopping areas in predominantly Shia Muslim areas.

Iraq is struggling to contain a wave of violence that has killed more than 350 people so far this month. More than 700 people were killed in attacks in April, according to a UN count, the highest monthly toll in almost five years.

“A driver hit another car and left pretending to bring traffic police. Another car rushed to take him away and right after his car exploded among people who had gathered to see what was happening,” said bystander Hassan Kadhim. “People were shouting for help and blood covered their faces.”

In another attack, back-to-back blasts struck an open-air market in the al-Maalif area, police officers said.

“What crime have those innocent people committed? Children, four-years-old, were killed. Who is responsible for these massacres?” one witness asked.

The street is one of the major hubs in the capital for clinics, pharmacies and shops. Firefighters were seen struggling to extinguish the flames from the debris of the car bomb as police sealed off the area.

Elsewhere, police said a car bomb went off in the capital’s eastern Baghdad Jadidah area as they were waiting for explosives experts to dismantle it, killing a civilian and wounding nine others.

Deadly explosions were also reported in other areas including in the largely Shia neighbourhoods of Sabi al-Boor, Bayaa and Kazimiyah.

In other parts of the country, separate shootings in the disputed province of Kirkuk killed an anti-al-Qaeda militiaman and a private generator operator, while a roadside bomb in the main northern city of Mosul left a police colonel dead.

Bombings on Shia and Sunni mosques, security forces and Sunni tribal leaders over a month-long surge in violence are deepening worries Iraq may tip back into the kind of widescale sectarian violence that killed thousands in 2006-2007.

Tensions between the Shia-led leadership and the country’s Sunni Muslim community are at their worst since American troops left in December 2011.

Sunnis have for months held demonstrations against alleged discrimination.

While the government has made some concessions aimed at placating protesters and Iraqi Sunnis in general, such as freeing prisoners and raising the salaries of Sunni anti-al-Qaeda fighters, but critics say underlying issues have yet to be addressed.

The latest surge in violence began in April after a raid on a protest site in the town of Hawija sparked clashes with security forces in which dozens died. 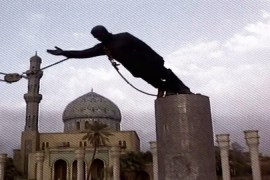 The day Saddam Hussein’s statue fell: Iraq and the media

Was the overplayed television moment truly a turning point in the Iraq invasion or was it myth-making by the media? 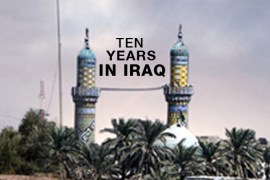 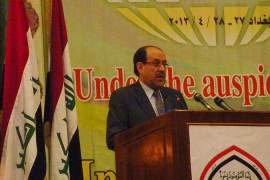 Maliki appears to lay blame for growing violence in his nation on Syria civil war and those providing “wind behind it”. 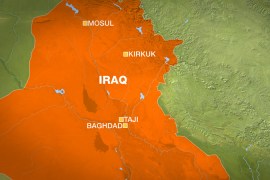 Eleven people were killed and at least 20 left wounded in attacks that struck Baghdad and Mosul.