Communist fighters have set off a roadside bomb and opened fire on a lorry carrying police in the northern Philippine province of Cagayan, killing seven police commandos and wounding eight more.

The members of the elite police Special Action Force were travelling to a hospital on Monday for a regular medical test when the rebels, hiding in the bush along a road in Cataratan, detonated the explosive device and sprayed the vehicle with gunfire, according to a police spokesman.

“The Philippine spokesperson we spoke to earlier said that it was a premeditated and coordinated attack by the New People’s Army,” she said.

She said the attacks were a common tactic by the Communist group to seize weapons.

The rebels have been waging a 44-year rural-based Marxist rebellion, which has claimed an estimated 120,000 lives.

The government recently suspended peace talks brokered by Norway after the rebels rejected an immediate ceasefire.

Commenting on Monday’s ambush, Rodrigo de Gracia, a regional police director, said the police commandos returned fire but were overpowered by the rebels, who later fled with weapons from the slain officers.

The wounded officers managed to escape on foot and were rescued by government troops in the Ballesteros Municipal Hospital in Cagayan province, more than 400km northeast of the capital, Manila.

Troops set up roadblocks and dispatched reinforcements to track down the assailants, Generoso Cerbo, police spokesman, said in Manila.

The New People’s Army rebels accuse successive Philippine administrations of subservience to US interests and failing to improve the lives of the poor.

Their numbers have dwindled to an estimated 4,000 fighters amid battle setbacks, surrenders and factionalism.

They are listed as a terrorist organisation by the US and the EU.

Alexander Padilla, the chief government negotiator, said early this month that the exiled rebel leader, Joma Sison, had himself proposed to fast-track the talks by establishing a ceasefire and a committee with the government to discuss political and economic reforms.

However, Sison later backed off and blamed the government for the impasse.

In Saturday’s clash in the south, seven communist fighters also were killed.

Six soldiers and about 10 fighters were wounded in the attack, Colonel Jose Cenabre of the Marine Corps said on Sunday.

Philippine security forces have been stretched thin by fighting the communist rebels while also battling Muslim fighters in the south.

Government troops backed by assault helicopters are searching for the fleeing fighters, who were believed to be led by Jul-Aswan Sawadjaan, an Abu Sayyaf commander accused in the kidnappings of a Jordanian journalist and two European bird watchers who are still being held by the fighters. 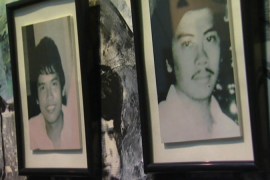 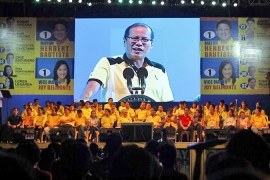 Message sent by midterm voters may be pro-reform but political influence of clans and dynasties remains undiminished. 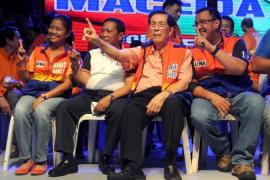 Clans rule 73 out of 80 provinces and with midterm elections on Monday, experts say dynasties are impeding progress. 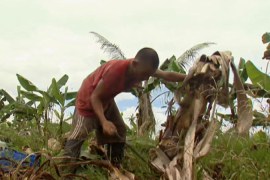