Guatemala has extradited ex-president Alfonso Portillo to the United States to face charges of laundering $70m.

Portillo was put on a plane on Friday under the escort of US agents.

“Hasta luego (see you later), people of Guatemala,” Portillo, 61, said, after describing his extradition as a “kidnapping” and accusing the Guatemalan  government of breaking the law.

“They have acted illegally against me from the beginning. They have violated all my rights,” he said as he boarded the flight at the Guatemalan air force base, holding two books in his hands.

“I will be back,” he declared after being taken from the military hospital where he was being treated for health problems.
Portillo, who was president from 2000 to 2004, had been fighting extradition since it was approved by then president Alvaro Colom in 2011.

Following a request from a New York court, he was arrested in January 2010 as he was trying to flee to Belize. Portillo has described the case against him as a “political persecution”.

Portillo was indicted by a US grand jury on charges of embezzling tens of millions of dollars of public funds and laundering the money through US and European banks, including $1.5m intended for Guatemalan school children.

His attorney, Mauricio Berriondo, said the extradition was “outside any legal framework” and was conducted “by force”.

In 2011, a Guatemalan court acquitted Portillo and two of his former ministers of conspiring to embezzle $15m from the defense ministry in 2001. His acquittal was confirmed by an appeals court in April. 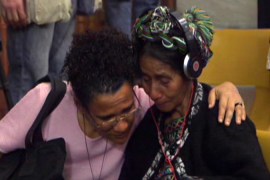 Challenges remain for justice in Guatemala

Many wonder if ruling against Efrain Rios Montt will hold after ex-military ruler’s conviction in genocide trial.