Thousands of anti-government protesters have rallied in Bahrain to demonstrate against a raid last week on a top cleric’s home.

Shia protesters in the village of Diraz, west of the capital Manama, threw stones at hundreds of riot police who responded with tear gas and water cannons, a witness said on Friday.

The violence continued for more than an hour before the demonstrators dispersed.

The raid by security forces on the home of Ayatollah Sheikh Issa Qassim on May 17 infuriated the Shia opposition and drew condemnation from neighbouring Shia power Iran.

The Gulf Island nation, home to the US Navy’s Fifth Fleet, has been at the centre of a series of pro-democracy protests over the past two years and has become a hot spot in a region-wide tussle for influence between Iran and Sunni Arab states such as Saudi Arabia.

The mass protests were crushed but smaller demonstrations continue, led by Bahrain’s Shia majority, who want the Gulf Arab state’s Sunni rulers to call elections and create a constitutional monarchy.

The raid on the ayatollah’s house prompted main opposition group Al-Wefaq to announce on Wednesday that it would withdraw from reconciliation talks with the government for two weeks.

Thousands gathered in the cleric’s village on Friday for a peaceful sit-in against their Sunni-led government.

Protesters at the sit-in, called by Al-Wefaq and authorised by the government, waved Bahraini flags and held up images of Sheikh Issa.

Police say the raid on the cleric’s home was not targeted but occurred during a security operation in the same neighbourhood. 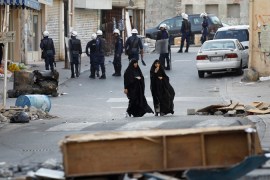 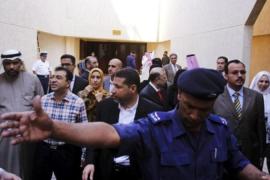 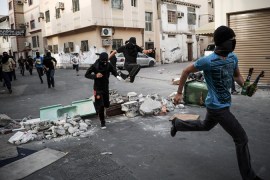 Formula One race takes place despite violence between anti-government protesters and police near the capital Manama.