Christine Lagarde, the International Monetary Fund chief, has been questioned by a French magistrate over her role in a $336m arbitration payment made to a supporter of former President Nicolas Sarkozy.

The money was received by Bernard Tapie, a high-profile businessman.

“It’s a pleasure to see you,” a smiling Lagarde said on Thursday as she arrived at the Paris court with Yves Repiquet, her lawyer, for a hearing that could last into Friday.

Lagarde and her lawyer were not expected to emerge until the end of the day’s proceedings, which could run into late evening.

The decision on whether to place her under investigation or give her “supervised witness” status will be announced at the end of the hearing.

As Sarkozy’s finance minister, Lagarde made a decision in 2007 to use arbitration to settle a long-running court battle between the state and Tapie.

The Reuters news agency said Lagarde risked being placed under formal investigation at the hearing.

Under French law,a formal investigation would mean there exists “serious or consistent evidence” pointing to probable implication of a suspect in a crime. It is one step closer to trial but a number of such investigations have been dropped without any trial.

Such a move could prove uncomfortable for the International Monetary Fund, whose former head, Frenchman Dominique Strauss-Kahn, quit in 2011 over a sex assault scandal, and for a woman rated the most influential in France by Slate magazine.

Lagarde, who has played down the investigation, appeared before the Court of Justice of the Republic (CJR), which probes cases of ministerial misconduct.

Tapie is a former politician and controversial business figure who went to prison for match-fixing during his time as president of French football club Olympique de Marseille.

Prosecutors working for the CJR suspect he received favourable treatment in return for supporting Nicolas Sarkozy in the 2007 presidential election.

They have suggested Lagarde was partly responsible for “numerous anomalies and irregularities”.
which could lead to charges for complicity in fraud and misappropriation of public funds.

The investigation centres on Lagarde’s decision to ask a panel of judges to arbitrate in a dispute between Tapie and Credit Lyonnais, the collapsed, partly state-owned bank, over his 1993 sale of sports group Adidas.

Tapie had accused Credit Lyonnais of defrauding him by consciously undervaluing Adidas at the time of the sale and argued that the state, as the former principal shareholder in the bank, should compensate him.

His arguments were upheld by the arbitration panel but critics claimed the state should not have taken the risk of being forced to pay compensation to a convicted criminal who, as he was bankrupt at the time, would not have been able to pursue the case through the courts.

The payment Tapie received enabled him to clear his huge debts and tax liabilities and, according to media reports, left him with 20-40m euros which he has used to relaunch his business career.

“Lagarde will for the first time have the opportunity to provide [the CJR] with explanations and clarifications that exempt her from any criminal responsibility,” Yves Repiquet, Lagarde’s lawyer, said of the court appearance.

“There’s nothing new under the sun,” Lagarde said last month in Washington.

“Ever since 2011 I had known very well that I will be heard by the investigative commission of the Cour de Justice.”

She has said the arbitration was necessary to put an end to a costly dispute, and has always denied having acted under orders from Sarkozy.

Lagarde would not automatically be forced to resign as IMF chief if she is charged, but such a ruling would certainly weaken her position.

Her contract requires that she maintain the integrity of the office and “strive to avoid even the appearance of impropriety in your conduct”.

Pierre Moscovici, finance minister, said on Wednesday that Lagarde “retains the full confidence of French authorities”, but suggested the government could seek to have the payout to Tapie nullified if it is found to have been fraudulent. 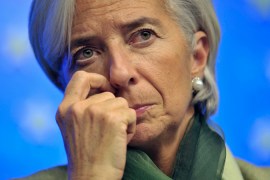 Christine Lagarde’s Paris home raided by police investigating her role in compensation scandal when she was minister.