Police in Istanbul have clashed with protesters trying to reach the city’s main square to mark May Day.

Citing security reasons, the government had banned a rally on Wednesday in Taksim Square, which is undergoing major renovations.

Underground stations, some buses and ferries across the Bosphorus were suspended to prevent large groups from gathering in the square.

Police fired tear gas to disperse hundreds of demonstrators trying to break through barricades to access the square, while protesters responded by hurling stones at officers.

The governor of Istanbul, Hüseyin Avni Mutlu, said 25 people, including 3 police officers, were injured during the clashes, and 72 people were detained.

Two of the injured, one a policeman and the other a high school girl, are in critical condition, Turkish media reports.

Security was tightened around the office of Prime Minister Tayyip Erdogan in the district of Besiktas, a short way from Taksim, where the heaviest clashes took place.

Those who tried to gather at Taksim Square included members of trade unions, political parties, socialists and anarchists.

Only a small group of Hak-Is (Confederation of Turkish Real Trade Unions) members were allowed to gather and leave flowers on the Republic Monument in the square.

Hak-Is is known to have close ties to the Turkish government.

Those hit by the tear gas fled indoors but the thick clouds of gas affected even those staying at home with windows closed, the Hurriyet Daily News reported.

Taksim Square has historic significance for many groups following a massacre on May Day in 1977 when unidentified gunmen opened fire on the crowd.

After security forces intervened with armoured vehicles, the chaos left at least 34 people dead, most of them crushed, and more than 100 injured.

“Facts about what happened, who killed them were never fully established,” Al Jazeera’s Hashem Ahelbarra, reporting from Istanbul, said.

“People say that it is our right to come here not only to celebrate May Day but also to honour the memories of those who were killed 36 years ago.”

May 1, a traditional workers’ day holiday across most of Europe, was cancelled as a national holiday in Turkey following a 1980 coup, but was reinstated in 2010 under pressure from trade unions. 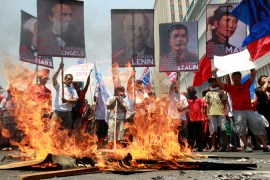