Taiwan has recalled its ambassador to the Philippines and announced it has frozen the hiring of Philippine workers to protest against the killing of a Taiwanese fisherman, rejecting an apology over the incident as inadequate.

Taipei said earlier that the Philippines had apologised over the incident, but that President Ma Ying-jeou insisted on Wednesday that Manila offer a formal apology and compensation, apprehend the killer and launch talks on the fishing industry.

“President Ma expressed his strong dissatisfaction over the Philippines’ lack of sufficient sincerity and its shifting attitude,” spokeswoman Lee Chia-fei told reporters, adding that the president would recall Taiwan’s envoy to Manila.

The 65-year-old fisherman was shot dead by Philippine coastguards last week after they said his vessel had strayed into territorial waters.

The incident sparked outrage in Taiwan at a time of high tensions between the nations over regional maritime disputes.

Antonio Basilio, the Philippines’ de facto ambassador who made the apology after a meeting with Foreign Minister David Lin on Tuesday, had also been asked to return to Manila to “help properly handle” the case, Lee said.

Perez is chairman of the Manila Economic and Cultural Office, which represents the Philippines’ interest in Taiwan.

However, Taiwan’s Premier Jiang Yi-huah said it was unacceptable that the apology came from the “people of the Philippines” rather than the government as it was the coastguard that was responsible for the shooting.

Al Jazeera’s Marga Ortigas, reporting from Manila, said the wording of the apology may have caused Taiwan to reject it.

“Apparently, the apology was worded as ‘from the people of the Philippines’ and Taiwan wanted it to be a government apology, which of course would not happen because of the One-China policy,” Ortigas said.

Our correspondent also reported that Taiwan had demanded that the Filipino officer involved in the shooting be turned over to Taipei, something the Philippines had rejected. Instead, the Philippine government suspended the entire crew of the coastguard vessel, and promised to conduct an internal investigation.

The Philippines only has formal diplomatic ties with Beijing, while maintaining a de-facto diplomatic relations with Taiwan, which is considered by China as part of its own territory.

After freezing the hiring of Philippine workers, Jiang said the second wave of sanctions would include a “red” travel alert against the Philippines urging the public not to visit the country, and the suspension of exchanges between high-level officials from the two sides.

Reacting to the threat, Edwin Lacierda, spokesman of Philippine President Benigno Aquino, appealed to Taiwan not to involve the Filipino workers in the diplomatic dispute.

“We understand the grief and hurt of the family and of the people of Taiwan over this unfortunate loss and we empathize with them,” Lacierda said in a statement.

Lacierda also promised that the investigation into the incident will be “thorough, exhaustive, impartial and expeditious”.

China, the Philippines, Taiwan, Vietnam, Malaysia and Brunei all have competing claims to parts of the strategic and resource-rich maritime region.

Taiwan has threatened to conduct a naval exercise in waters near the Philippines in protest over the fisherman’s death.

There are currently 87,000 Philippine workers in Taiwan. The number is about a third of Taiwan’s foreign workers. Labour authorities said nearly 2,000 new applications are submitted monthly.

In 2011, Taiwan temporarily expanded the screening period for Philippine workers and threatened to freeze hiring over a diplomatic row sparked when Manila deported Taiwanese nationals to China. 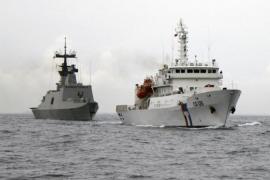 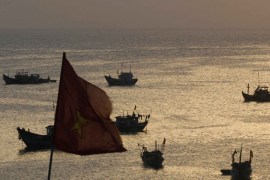 Manila invoked a UN treaty on territorial limits of coastal states in their dispute with Beijing over South China Sea. 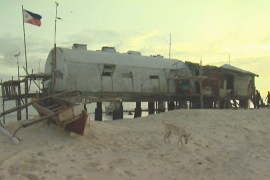 Filipinos have settled on Thitu Island as a means to strengthen the country’s claim on the Spratlys.