New Orleans police have offered a $10,000 reward and blurry surveillance camera images in hopes of both leading to arrests in a Mother’s Day shooting that wounded 19 and showed again how far the city has to go to shake a persistent culture of violence that belies the city’s festive image.

Video released early on Monday shows a crowd gathered for a boisterous second-line parade suddenly scattering in all directions, with some falling to the ground.

They appear to be running from a man in a white T-shirt and dark pants who turns and runs out of the picture. The image is not clear, but police say they hope someone will recognise him and notify investigators.

Police said there may have been as many as three armed men.

The suspects escaped despite the presence of officers who were interspersed through the crowd as part of routine precautions for such an event.

Jarrat Pytell, medical student, said he was walking with friends near the parade route when the crowd suddenly began to break up.

“I saw the guy on the corner, his arm extended, firing into the crowd,” Pytell said Monday.

“He was obviously pointing in a specific direction he wasn’t swinging the gun wildly.”

Pytell said he tended to one woman with a severe arm fracture – he was not sure if it was from a bullet or a fall – and to others including an apparent shooting victim who was bleeding badly.

Three victims remain in critical condition, though their wounds weren’t believed to be life-threatening. Most of the wounded had been discharged from the hospital.

It is not the first time gunfire has shattered a festive mood in the city this year.

The shootings are bloody reminders of the persistence of violence in the city, despite some recent progress.

Last week, law enforcement officials touted the indictment of 15 people in gang-related crimes, including the death of a 5-year-old girl killed by stray gunfire at a birthday party a year ago.

The city’s 193 homicides in 2012 are seven fewer than the previous year, while the first three months of 2013 represented an even slower pace of killing. 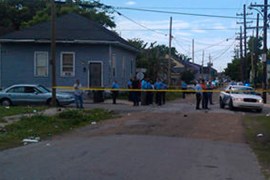 Many wounded in New Orleans shooting

Police say at least 19 people injured in “act of street violence” during Mother’s Day parade in southern US city.