Former British Prime Minister Margaret Thatcher has died, following a stroke. She was 87.

Shortly after her death was announced on Monday morning, tributes began pouring in from world leaders.

US President Barack Obama said: “As a grocer’s daughter who rose to become Britain’s first female prime minister, she stands as an example to our daughters that there is no glass ceiling that can’t be shattered.”

Flags have been lowered to half-mast at Britain’s parliament to mark her passing as flowers piled up at her London home – but at the other end of the political spectrum, left-wingers threw parties upon news of her death.

Several of Tuesday’s newspapers in the UK focused on how divisive the leader was.

Some left-wingers, including in south London – the scene of fierce rioting in the 1980s, blamed on deep social divisions as well as racial tensions – convened a street party to celebrate.

Thatcher’s government privatised several state-owned industries and was involved in a year-long stand-off with unions during the Miners’ Strike of 1984-5.

There were also signs of celebration in Argentina. Thatcher sent a task force to recapture the Falkland Islands after a 1982 invasion by Argentine forces, in an operation she considered one of the triumphs of her rule.

The Socialist Worker newspaper led with a one word headline: “Rejoice!”, while the Morning Star, another title focusing on trade union issues, said Thatcher was “the woman who tore Britain apart.”

Thatcher led the Conservative Party to three election victories, governing from 1979 to 1990, the longest continuous period in office by a British prime minister since the early 19th century.

She retired from public engagements in 2002 following a series of small strokes, and was only occasionally seen in public since then.

The British government said a ceremonial funeral with military honours would be held at London’s St Paul’s Cathedral for the late leader.

In line with her family’s wishes, the ceremony will not be a full state funeral.

“A wide and diverse range of people and groups with connections to Lady Thatcher will be invited,” Cameron’s office said in a statement.

“The service will be followed by a private cremation. All the arrangements being put in place are in line with wishes of Lady Thatcher’s family.”

Thatcher struck up a close relationship with US President Ronald Reagan in the Cold War, and shared his belief that free markets would build a better country than reliance on a strong, central government.

Former Soviet President Mikhail Gorbachev, who held frequent meetings with Thatcher at the end of the Cold War, said she was a “great politician” who will go down in history. 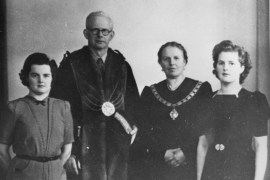 Al Jazeera takes a look at the life and legacy of Britain’s first female prime minister. 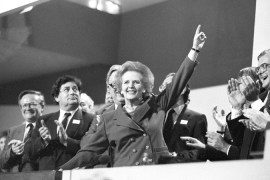 Daughter of a grocer, Thatcher studied chemistry at Oxford before becoming the first woman to be elected as PM. 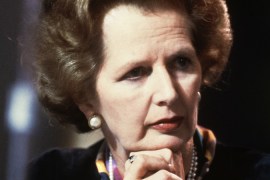 How Thatcher began life and rose to the top

Timeline on the life of former British prime minister, who died at the age of 87 after suffering a stroke.