Kenya’s new president, Uhuru Kenyatta, who faces international charges of crimes against humanity, has been sworn in to office at a ceremony in a stadium in Nairobi packed with supporters and foreign dignitaries.

Kenyatta took the oath on Tuesday on a bible used by his father, Kenya’s first president, and was watched by tens of thousands of Kenyans, almost a dozen African leaders and other officials.

“I do swear that I will be faithful and bear true allegiance to the Republic of Kenya,” Kenyatta said, clutching a bible as he took the oath of office.

Many Kenyans hope that the son of the nation’s independence hero will live up to his pledge to be a leader for all and not just work for people from his own ethnic group, a practice they have come to expect from their politicians.

For Western states, big donors to East Africa’s biggest economy, Kenya is a vital player in the regional battle against ultraconservative Islam.

But they now have to juggle their wish for close ties with a policy of limiting contacts with those indicted by the ICC in The Hague.

The US and European powers sent ambassadors to attend Kenyatta’s inauguration ceremony, a level of representation diplomats said was still in line with their position of having only “essential contacts” with indictees.

“My sense is everyone will find some method of accommodation.”

If the West slips up, it also risks opening more space to China and other Asian powers that are gaining both political and trading influence in Africa.

Sitting alongside the Western envoys will be about a dozen African heads of state, as well as prime ministers and other top officials.

China and India, neither signatories to the statutes that set up the ICC, are sending senior government officials.

Tens of thousands of Kenyans, many waving flags, gathered for the ceremony at a Nairobi stadium from the early morning.

“This is a new beginning,” said Elija Toroitich, a 56-year old farmer at the stadium who voted for Kenyatta and his deputy William Ruto, who also faces ICC charges.

“We expect a lot from them due to the pledges they made in their manifesto.”

He and others want Kenyatta, a 51-year-old former finance minister whose family controls a sprawling business empire, to deliver faster economic growth and help the poor in the nation of more than 40 million people.

“He and his father own the biggest plot of land in Kenya,” Michael Amoah, a political analyst, told Al Jazeera.

“Under his watch he has to negotiate the new law that will redistribute land.” 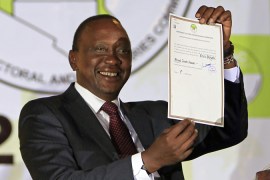 Uhuru Kenyatta: In an ‘awkward situation’?

We ask how Kenya’s new president will govern while facing trial for crimes against humanity in The Hague. 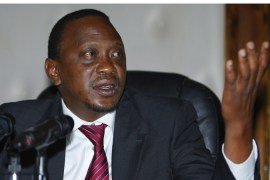