Hundreds of thousands of people have held protests in Bangladesh to demand that the government introduce an anti-blasphemy law that would include the death penalty for bloggers who insult Islam.

Protest organisers called Saturday’s rally the “long march”, with many travelling from remote villages to the capital, Dhaka’s Motijheel area that became a sea of white skull caps and robes.

Supporters of Hefazat-e-Islam, an Islamist group which draws support from tens of thousands of religious seminaries, converged on Dhaka’s main commercial hub to protest against what they said were blasphemous writings by atheist bloggers, shouting “God is great – hang the atheist bloggers”.

“I’ve come here to fight for Islam. We won’t allow any bloggers to blaspheme our religion and our beloved Prophet Mohammed,” said Shahidul Islam, an imam at a mosque outside Dhaka who walked 20km.

The religious group, which has the backing of country’s largest party Jamaat-e-Islami, organised the rally in support of its 13-point demand including enactment of a blasphemy law to prosecute and hang what they call atheist bloggers.

They defied a pro-government national strike by secular protesters – who staged a smaller rival protest in Dhaka – aimed at foiling the Islamists’ march.

A local leader of the ruling Awami League party was killed in Bhanga, a town southwest of Dhaka, when Hefazat-e-Islami party supporters clashed with pro-government activists.

Al Jazeera’s correspondent, who cannot be named for safety reasons, speaking from Dhaka, said that very huge crowds had gathered.

She said that while there was a lot of support for the march from the countryside where Hefazat-e-Islam is good at mobilising people from, the country is very divided.

It was the latest protest to rack Bangladesh, deepening tensions between secularists and the largest Islamic party, Jamaat-e-Islami, whose leaders are under trial for crimes committed during the country’s 1971 war of independence.

The bloggers, who deny they are atheists, have sought capital punishment for those found guilty of war crimes during the nation’s liberation war.

Both secular and conservative Muslim protesters have taken to the streets over the war crimes trials, and more than 70 people have been killed in the violent protests that have taken place since February when a prominent Jamaat leader was sentenced to death.

Bangladesh says as many as three million people were killed and thousands of women raped by Pakistani troops and local collaborators during the war.

Sheikh Hasina, the current prime minister and Awami League leader, initiated the war crimes trials in 2010. Ten of the defendants convicted or on trial are from Jamaat-e-Islami, while two others belong to main opposition Bangladesh Nationalist party.

Speaking to Al Jazeera, Shakil Ahmed of Ekattor television in Bangladesh, said that the protests on Saturday were peaceful and had been fuelled by misinformation on both sides.

Sobhan said that the march was less about a blasphemy law but was more of a reaction to calls for the death penalty for political party leaders being tried for war crimes.

Our correspondent said that the real pressure would be felt on the country’s economy.

“Every time there is a strike it shuts down the economy … Economic issues are likely to put pressure on the ruling Awami party.”

Last week, four online writers were arrested on charges of hurting religious sentiment through their Internet writings against Islam.

Sobhan said the arrests were being seen as a “heavy-handed measure” to appease Islamists.

Muhiuddin Khan, Bangladesh home minister, said on Wednesday the government had identified 11 bloggers, including the four detainees, who had hurt the religious sentiments of the nation’s majority Muslim population.

The government has blocked about a dozen websites and blogs to stem the unrest. It has also set up a panel, which includes intelligence chiefs, to monitor blasphemy on social media.

Under the country’s cyber laws, a blogger or Internet writer can face up to ten years in jail for defaming a religion. 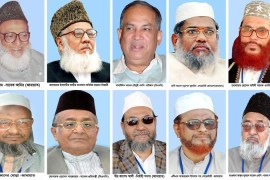 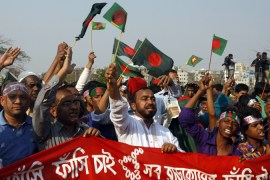 Bangladesh: The ghosts of 1971

The country’s independence war created divisions that persist to this day, in politics, religion and the media. 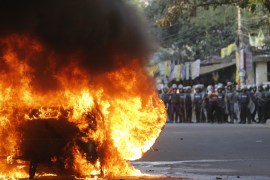 Will addressing Bangladesh’s past struggle for independence serve to heal historical wounds or just erode its stability? 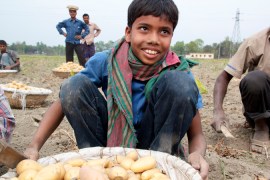