North Korea has asked foreign countries to consider evacuating their embassies in Pyongyang, amid soaring tension on the Korean peninsula following a month-long war of words between the North and the South.

But warnings by the North that nuclear war could break out at any time have not resulted in action, with Germany and Britain among the first to confirm their embassy staff are staying put.

“For now, the embassy can continue working,” the German foreign ministry said in a statement on Saturday. “Regarding the embassy’s security, there are ongoing consultations, particularly with the other foreign partners who also have embassies” in the country.

The heads of EU missions in North Korea are due to meet on Saturday to hammer out a common position following warning.

Britain is one of several European countries including Russia to receive a letter regarding the safety of its embassy in Pyongyang, as North Korea moved two mid-range missiles to its east coast.

The Foreign Office said on Friday that North Korea had warned Britain that it could not protect foreign embassies after April 10 in the event of a conflict.

“The DPRK has responsibilities under the Vienna Convention to protect diplomatic missions and we believe they have taken this step as part of their country’s rhetoric that the US poses a threat to them,” the Foreign Office spokesperson said.

It said it had “no immediate plans” to evacuate its embassy and accused the North Korean government of raising tensions “through a series of public statements and other provocations”.

The report cited a senior military official as saying: “Early this week, the North has moved two Musudan missiles on the train and placed them on mobile launchers.”

The report could not be confirmed, but White House spokesman Jay Carney said that based on past behaviour, “we would not be surprised” to see Pyongyang conduct another missile test.

“We urge them to stop with the provocations,” he said.

Earlier, when only one missile was reported, Kim Kwan-jin, South Korea’s defence minister, said it could reach a “considerable distance” but not the US mainland, telling legislators it “could be aimed at test-firing or military drills”.

Intelligence analysis quoted by Yonhap said the missile was believed to be a Musudan which has an estimated range of about 3,000km or more.

North Korea has been railing against US-South Korean military exercises that began in March and are to continue until the end of this month.

At the diplomatic level, Ban Ki-moon, UN secretary-general, expressed deep alarm at rising tensions, though UN humanitarian workers remain active across North Korea for the time being, according to a spokesperson.

“UN staff in the DPRK [North Korea] remain engaged in their humanitarian and developmental work throughout the country,” Martin Nesirky, a UN spokesman, said.

“The secretary-general remains deeply concerned about escalating tensions on the Korean peninsula.”

Nesirky said UN officials were at a meeting on Friday in Pyongyang during which North Korean officials asked foreign diplomats to consider moving staff out of their embassies.

Meanwhile on Saturday, four days after Pyongyang closed the border to people and goods, 21 more South Korean began leaving the North and the factory where they work.

The Kaesong industrial park is considered the last remnant of cooperation between the two countries, and 100 more workers are expected to have left by the end of the day.

One South Korean manager of the factory park, 68-year-old Han Nam-il, who crossed the Unification Bridge towards South Korea on Saturday morning, said that the security guards at the North Korean side of the border were “were fully armed,” but the number of soldiers was “just as usual.” 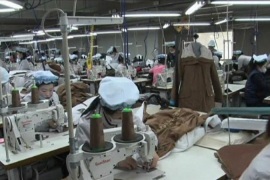 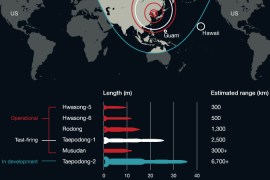 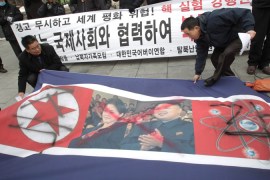