At least 100 people have been killed and many more are feared dead after an eight-storey building collapsed in the outskirts of Dhaka, Bangladesh.

A massive rescue mission continued as officials said on Wednesday that hundreds of people were still trapped in the rubble. Fire crews said up to 2,000 people were in the building when it fell.

Only the ground floor of the Rana Plaza in the Savar district, which also housed a garment factory, remained intact after the collapse at 8:30am local time on Wednesday morning, said the officials.

Doctors said that hundreds of people had received treatment for their injuries.

Prime Minister Sheikh Hasina has announced a national day of mourning for Thursday when flags will fly half-mast in memory of the victims.

Al Jazeera’s correspondent in Dhaka, who is not being named because of reporting restrictions, described the scene as chaotic.

“It is a scene of complete mayhem and chaos. Hundreds of people are trapped under the rubble and are still being pulled out,” she said.

“The army has taken over rescuing people from the disaster. The army, police and volunteers are working collectively to pull people out of the rubble”.

Our correspondent said there had been some reports that cracks were seen forming in the building on Tuesday.

Mohammad Asaduzzaman, in charge of the area’s police station, said factory owners appeared to have ignored a warning not to allow their workers into the building after a crack was detected in the block.

Five garment factories – employing mostly women – were housed in the building, including Ether Tex Ltd., whose chairman said he was unaware of any warnings not to open the workshops.

“There was some crack at the second floor, but my factory was on the fifth floor,” Muhammad Anisur Rahman told Reuters.

“The owner of the building told our floor manager that it is not a problem and so you can open the factory.”

Abdur Rahim, who worked in a garment factory on the fifth floor, said a manager assured them there was no problem with the building.

“We started working. After about an hour or so the building collapsed suddenly,” he said.

The website of a company called New Wave, which had two factories in the building, listed 27 main buyers, including firms from Britain, Denmark, France, Germany, Spain, Ireland, Canada and the United States.

Fires are also a problem in Bangladesh’s booming garment industry, the second biggest in the world.

In November, more than a hundred workers were killed in a fire at a factory in an industrial suburb of Dhaka. It caused a public outcry over safety standards. 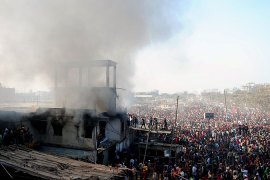 Many killed in Bangladesh factory fire 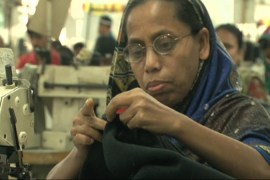